February 9, 2017 . . . Another one is gone.  Irwin Glover passed away.  I met him when I joined the Fowlerville Rotary -- he was one of the good ones, helping us sing every week and welcoming all new members with grace and generosity.  Here's his obituary:


LONGTIME FOWLERVILLE BUSINESSMAN & COMMUNITY VOLUNTEER, IRWIN GLOVER, DIED ON FEB. 9
Irwin Wallace Glover, age 87 of Fowlerville, passed away peacefully late Thursday evening, February 9, 2017. Born in Howell on December 29, 1929, he was the son of Walter and Lena (Quackenbush) Glover.
A lifelong area resident, Irwin was a 1948 graduate of Fowlerville High School, a proud U. S. Navy veteran, former owner and operator of Glover Electric and Woodshire Place in Fowlerville. Irwin was also a pilot, past president and committee chairman of the Fowlerville Rotary, former member of the board of directors for McPherson Hospital, had taught Sunday school and sang in the choir and had been a member of the Fowlerville Masons. He enjoyed golf, snowmobiling, fishing and traveling. Most of all, Irwin enjoyed spending time at his cabin on Drummond Island.

September, 2012 . . . Frank Utter, long-time business owner, resident, and Rotarian passed away September 11, 2012.  I've been in Rotary since 1999, and Frank was one of the first members I sought out.  Numerous people had mentioned he was the person to talk with since I was new to the embroidery business and he had serviced the community for many years through his store, Utter's Men's and Women's Wear, with embroidered varsity jackets and other items.

I am so glad Frank and I became friends because, over the years, we have had some interesting conversations -- both about the village's history, about politics, and pretty much about anything that came to mind.  I will miss Frank and wish to convey my sincerest sympathy to his wife, Ann, and all of their family.

Following is the picture published in the Livingston Daily (Press and Argus):

March, 2012 . . . Fowlerville has lost another "old-timer" -- Ken Tannar passed away recently.  Ken was our last remaining charter member of the Fowlerville Rotary Club, having been a part of the inaugural group to start the club in 1947.  When I joined Rotary in 1999, Ken and I became fast friends and I will always fondly remember his hugs nearly every time we would see each other.  He will be missed. 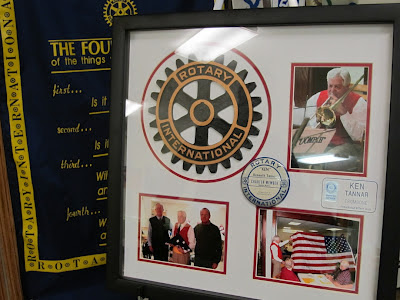 February, 2012 . . .With a very heavy heart I write this note that the community has lost two very special people -- Marion and Bruce BeVier.  They both passed away last week within a few days of each other.  Bruce was my very good friend after having served with him as President-Elect the year he was President of the Fowlerville Rotary Club, 2002-03.  I was asked to speak at the funeral but knew I would not be able -- I could write something if someone else would read it.  Thank goodness for Jerry Bell.  He read my tribute and it follows after this picture from 2007. 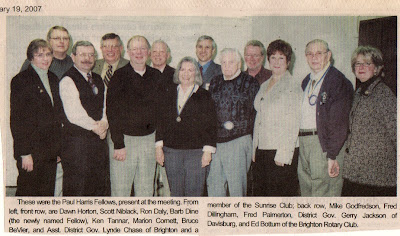 Bruce was so many things. We could recount everything his life stood for from his service to our country, to his love for his family, to a successful career, and to his commitment to the community he lived in, but it was his grace in how he lived the life given to him that will remain in my heart.

And in that graciousness, he possessed the ability of quiet leadership. As President of the Fowlerville Rotary club nearly ten years ago, he gave unselfishly of his time and energies and set an example to the board of what the club could accomplish to help in this community and around the world. As the one who served as his President-Elect, that was the year Bruce and I became more friends than acquaintances.

In July, 2002, when he began his presidency at the end of Bill Mollison’s service, Bruce had a plan in mind, and one of his agenda items was to keep everyone informed. That entailed re-instituting a newsletter for the club, and I was tasked to make it happen. The newsletter was to follow in the steps of one published years earlier and was long before Rotary had set up websites to keep everyone in the loop. As I recently looked back over the 12 issues of that year, the membership grew, fundraisers we still do today began during his year, and because of that newsletter, he made sure everyone’s birthday or anniversary was recognized with a song. That year of service was filled with hard work and accomplishments, a welcoming presence and dignity, and lots of fun and laughter.

By the time his year of service ended, stepping into his “shoes” was most intimidating yet confidence-inspiring because he not only lead the club but made sure the next board was ready for the task ahead.

I will always be grateful of the chance to have known Bruce, albeit not enough years. His friendship and encouragement was given freely and without conditions just as I know that is how he gave of himself to everyone in his life.

February, 2012 . . . The village recently lost another great community leader and one-time business owner.  Tom Braun operated Braun Cleaners on Free Street until 2005, when he retired and sold the building to Christian Resources International.  This cleaners business had been in the family since 1957, when his parents purchased the on-going concern.  I didn't know Tom all that well, but anytime I took my clothes to him, he was just one the nice people in this village that I enjoyed talking with.  I have two memories in particular that come to mind when I think fondly of Tom:

~~After my younger daughter's wedding, she wanted to store away her beautiful dress and didn't know where to start.  I spoke with Tom and he assured me they would clean it properly, make sure it was totally dry so no mold could propigate, and box it, wrapped in blue tissue.  When I picked it up, he had even boxed it in a beautifully stencilled wedding dress box.  Thank you, Tom.

~~When I published The Fowlerville Chronicles, and when he found out about it, he came looking for me with a smile on his face and money enough to purchase three copies.  Ultimately, they bought even a fourth copy.  Thank you, again, Tom.  You have been appreciated.

One final note, when the Brauns owned the cleaners, a curious incident happened.  You can read about it by clicking here.

Wednesday, November 23, 2011 . . . Following is the obituary found in the Livingston Daily paper for Shirley Lutz.  I did not know Shirley Lutz like so many in Fowlerville will remember her but I would like to publicly thank her for a most enjoyable few hours of reminiscing.  She called me shortly after The Fowlerville Chronicles was published and I took a copy over to her at her house on Frank Street.  We sat and talked about so many things in Fowlerville and she brought them to life with her colorful descriptions.  Thank you to a very lovely lady.

Shirley R. Lutz, age of 86, of Fowlerville, passed away Sunday Nov. 20, 2011. She was born Feb. 22, 1925 in Belleville to Orville L. and Lora (Ford) Dingman. Shirley married Douglas Lutz on June 15, 1947 at the Methodist Church in Fowlerville, he preceded her in death in 2007. She graduated from Fowlerville High School in 1942 and taught 5th grade at Fowerville Schools. She was a member of Fowlerville First United Methodist Church. Surviving are her 5 children: Eric (Margaret) of Howell, Paul of Olympia, Washington, Marc (Marlene) of Howell, Diane Lutz of Olympia, Wa. and Lindsay Lutz of Congers, NY and 8 grandchildren. She was preceded in death by her Husband and sister: Eva Wright and 3 brothers: Ford Dingman, Deane Dingman and Owen Dingman. Funeral Services Wed. Nov. 23 at 11AM at the Fowlervillle Methodist Church with Pastor Tom Tarpley officiating. Visitation will be held Tuesday 2-4 and 6-8 at the Niblack Funeral Home, Dillingham Liverance Chapel. Interment at Greenwood Cemetery. Memorial contributions may be made to the church. www.niblackfuneralhome.com

As I am unable to attend the funeral and give Waneta my sincere sympathy, this is where I will say I have felt very fortunate to have known Howard.  My husband and I have not known Waneta and Howard all that long -- maybe ten years -- but I knew immediately this was a couple I would always be happy to chat with for a few minutes, wave at from across the aisles in the grocery store, and see every Wednesday at our Rotary luncheons, where Waneta served up some of the best lunches.  We would say that might have even been why our membership numbers were up.

Howard was there, helping in the kitchen, nearly every week so it was always a delight to see him and get a hearty hello and giant smile in return.  How fortunate for me and our club!

My heartful sympathy goes to Waneta and their family today.