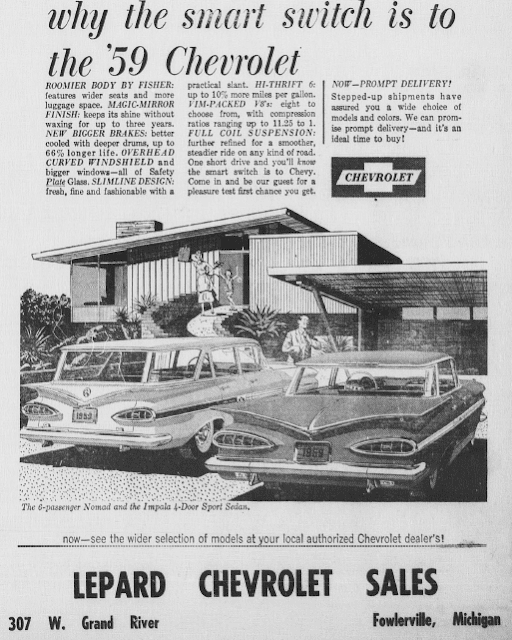 A few blocks east of the main four corners, where you will now find KW Corporation and the Fowlerville Pizza Box, Lepard Chevrolet showed off the latest and greatest.  In 1959, found in "The Fowlerville Review," big fins were all the rage.

Did anyone have one of these cars?

Lepard actually started out at the northwest corner of East Grand River and South Second Street, the former location of Maria's School of Dance.  As a reminder, there are nearly 3,000 posts on this site.  I did a quick search on the "Lepard" name and at least a half dozen articles came up.  So, please remember to search if you'd like more information!
Posted by amuse me at 1:00 AM 1 comment:

Mr. Bunn sold his dealership to Gordon Harmon, as reported in "The Fowlerville Review."  He'd owned it from 1921-1948, with a four-year break somewhere in the middle of that.  Without doing a great deal of research, I'm remembering Mr. Bunn lost his son, Ken, in an automobile accident, east of Fowlerville, on Grand River Avenue.  I'm wondering if Mr. Bunn took a break from the dealership when this happened.

At one time, at about where Owosso Road is, the curve was much sharper, nearly a 90-degree turn.  Older maps show it as such.  According to an article I found while doing research for "The Fowlerville Cronicles," this is about where the young fellow's accident occurred.

Eventually, Gordon Harmon would go onto real estate as well as owning this newspaper.

Holt and Hart were partners in dry goods stores, 10-cent barns, and doing photography.  There are numerous pictures from the early 1920s where they documented various houses and buildings.  They are treasures.

The picture and article show the Holts celebrating their 60th anniversary.  The other interesting article is in the right column.  A car accident south of town, Fowlerville Road and VanBuren.  That's always an interesting intersection even now due to speed on Fowlerville Road.  The Mrs. Blank mentioned was probably the wife of H.T. Blank, a local jeweler.

Any of these names can be searched on this blog for more articles. 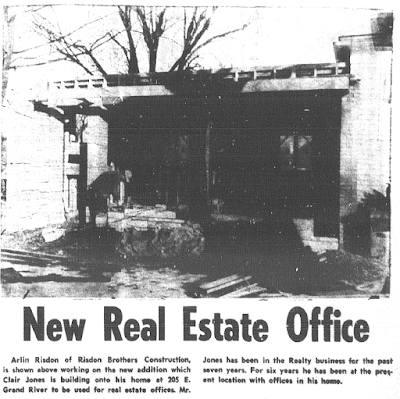 I knew this building, at the corner of East Grand River and South Second Street, as a collection office; others may remember it as Joseph Cox's law offices.  But, in 1958, it was part of an addition to a house where Mr. Clair Jones lived and the new add-on would be his office space.

Neither the house nor the building exist, both having been torn down a few years back.  The lot is empty except for a large rock at the corner, honoring John Gilully, an officer in the Civil War.

If you do a search on this blog for the military officer, you will find various articles and some squint shots I've posted over the years.

Another item to search on would be the "Spencer House."  Early on, in Fowlerville's development, a large white building stood at that corner and was used both as a storefront for travelers' needs as well as a few rooms for let.  The building was gone by about 1915-16.

The article for this addition was found in the December 31, 1958, issue of "The Fowlerville Review."  As a reminder, if you ever would like to do research in Fowlerville newspapers, head to the Fowlerville District Library.  The ladies there will be more than pleased to help you do a search of the digitized newspapers.  They are available from the years 1874 through nearly current.
Posted by amuse me at 1:00 AM No comments: 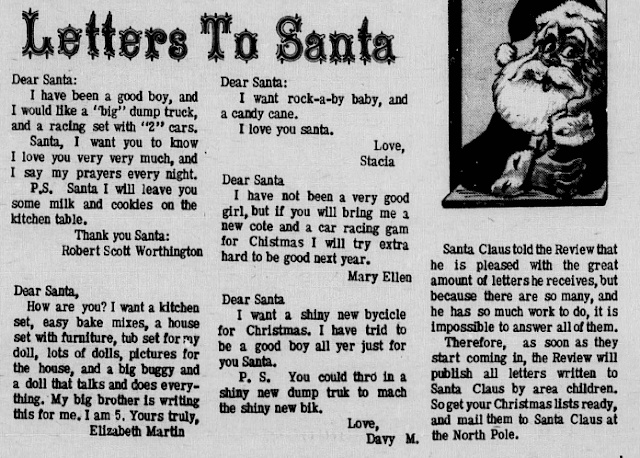 This is fun -- I looked in a December, 1968, issue of "The Fowlerville Review" and, on the front page, there were wonderfully-written letters to Santa.  I wish we could find out if Robert and Elizabeth and Stacia and Mary Ellen and Davy were lucky enough to get what they asked for.

At this time in the newspaper's history, Dick Rudnicki was the editor and publisher of the paper.  I have forever been grateful for drives around town as Dick told me various stories and identified storefronts and homes.  He is the Fowlerville encyclopedia, for sure!

I hope everyone has a Merry Christmas with family and friends, and loads of good eats.  And, hopefully Santa brings you what you're wishing for.
Posted by amuse me at 1:30 AM No comments: 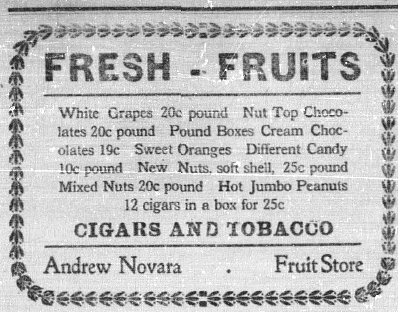 A couple days back I showed an advertisement from 1945 for Spagnuolo's Confectionery.  Today, I thought we needed to see a 1919 Novara ad, as shown in "The Fowlerville Review."  Mr. Andrew Novara had his store where Sweet Sensations now offers up wonderful chocolate treats and before the Spagnuolo family made it one of their storefronts.

Such a wonderful variety of items to purchase right before the Christmas giving season.
Posted by amuse me at 7:01 AM No comments: 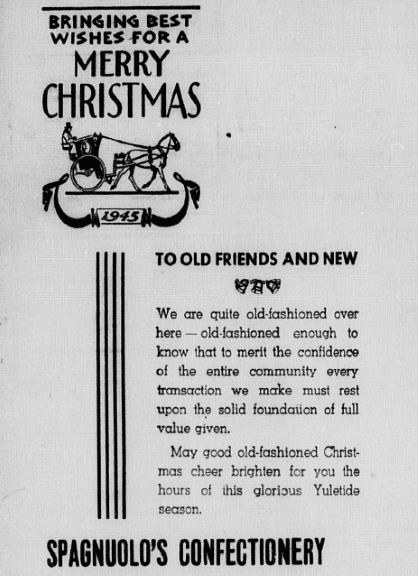 I have absolutely been AWOL from this blog--so much going on!  But, that's just an excuse.  Over the holidays, I'm thinking things might slow down a bit.  Because of that, I'll look for some interesting articles and post them.  Don't give up on me!

I headed to Christmas, 1945, in "The Fowlerville Review," and immediately the above advertisement jumped out at me.  Yesterday, I had the absolute pleasure of meeting one of the Spagnuolo children--we're not young anymore!--but it was such a delight to listen to her remembrances of growing up in Fowlerville.  The ad above seemed appropriate for this morning's post.

I hope all of you enjoy the holidays and come back for a visit as I'll be posting more.
Posted by amuse me at 5:28 AM No comments: