For those of you who remember having rolls of film developed, anyone remember Sidell Hardware running advertisements like the one below?  This one is from December, 1959.  Bring back some fun memories of getting that envelope, quickly opening it, hoping that most of the pictures were in focus?  Invariably, there were some totally out of focus but still treasured!

I suppose many of us--if we decide to have prints of digital pictures--use online sources such as Shutterfly and Vistaprint.  I'm still old-school enough, for those special times, I get prints made.  We just returned from a six-week road trip and I ultimately had 1,800 pictures printed.  It was a little pricey but I don't ever want to lose those memories of such an awesome trip. 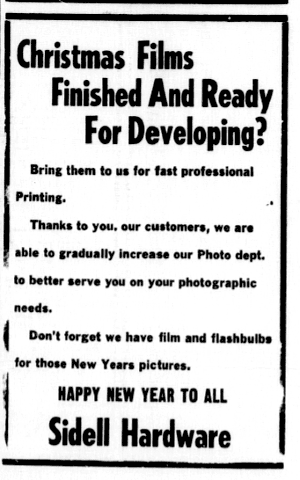 My New Year's resolution is to get back to posting a bit more often so please be sure to check back.  A lot of my time was spent the last couple of years writing two historical fiction novels ("Juniper and Anise" and "Tilly Loves Johnny"--which I would love to have you purchase to keep me going).  Both are set during the Prohibition Era in a small town that looks a lot like Fowlerville.  I'm working on a third novel currently entitled "She Wore a Hat in Prison."  Can you guess maybe someone ends up in prison that looks a lot like Jackson State Prison at the turn of the 1900s?
Posted by amuse me at 7:32 AM No comments: