I like to walk the Rotary Mile at the Community Park a couple times a week for variety, and the other day I finally slowed down to read a sign posted on a fence by the path, about in the southeast corner of the park.  It reads:

This is a blackberry plant.  The fruit is not ready to be picked until it is black.  If the fruit is red, please do not pick!  If the berry does not 'fall' off with a slight pull, it is not ripe.  Be responsible . . . enjoy a few as you pass by. 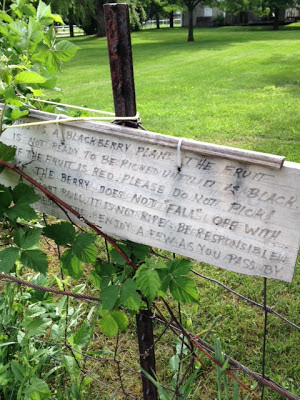 Here's the bush -- I'll be watching to see when the berries are black! 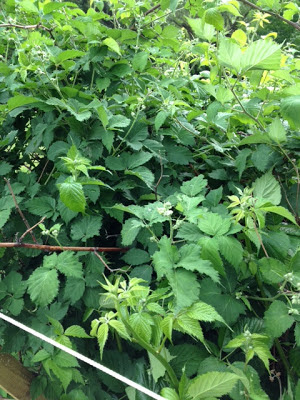 Isn't this just the coolest thing!?
Posted by amuse me at 1:00 AM No comments: 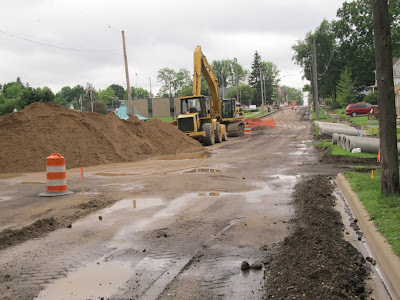 My husband and I were in town Sunday morning to take a two-mile walk at Community Park (twice around).  Before our exercise, we stopped at the north end of the road work on North Grand Avenue to see equipment and mounds of dirt, and mud from the rain during the night.  It looks like all of the old sidewalk concrete has also been torn up and new walks will be installed.

After our walk?  Olden Days, of course, for a yummy Father's Day breakfast.
Posted by amuse me at 1:00 AM No comments:

Sad things happen.  And, one of the saddest, and definitely horrific, was a drowning that happened in 1928.  A mother drowned her son one late afternoon -- no explanations, no forewarning (although after the fact some spoke about how the mother was acting odd).  A year and a half later, the remorseful mother hung herself.

The lad of six was buried in between his grandparents -- Charlotte and John Snell.

And then the years advanced, with the family not wanting to talk much about this murder.

Years later, step in Barb Thumudo, a local resident many will know.  A couple years ago, she began research on this family, remembering how her own grandmother -- who used to live next door to the family when the murder happened -- would occasionally mention that horrible event.  In Barb's search, she found a family member living in Washington and they were soon  in e-mail contact.

Very long story told short, Barb made it happen to have a headstone made for Paul Snell and two family members were in Fowlerville this last Thursday, and a small, intimate ceremony was conducted honoring a young lad, long forgotten but no more.  The new headstone has been nicely placed between his grandparents' headstone.  If you would like to see it in person, head to the northwest corner of the old portion of Greenwood Cemetery. 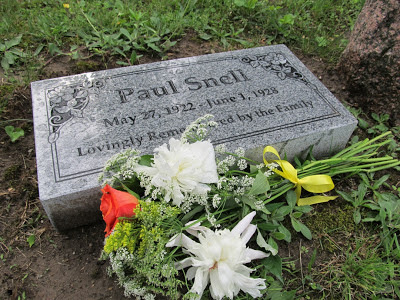 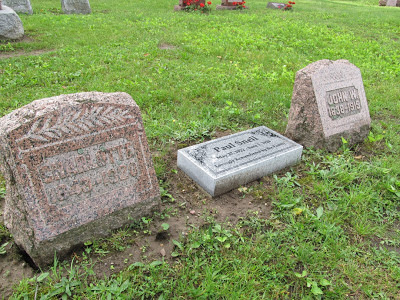 Those in attendance at the honorarium were two family members of Paul Snell, Barb Thumudo, Wayne Copeland, myself, and Scott Niblack, offering a couple of prayers and comments.

So many people work behind the scenes, unrecognized and and quiet in their help, making lives better in today's world.  Some, such as Barb, work behind the scenes to remember those before us.  Isn't it wonderful there are so many types in this world?
Posted by amuse me at 1:00 AM No comments: Another day and more equipment has been brought to North Grand Avenue for the sewer and water work.

Whenever I get into town, I swing into the fire department parking lot and take pictures.  Maybe the next time, I'll head to South Street and see if I can get another angle.

Speaking with Wayne Copeland, Village President, the other day, he reiterated the more pictures the better -- always good to record history.
Posted by amuse me at 1:00 AM No comments:

Road work, including water and sewer updates, have begun on North Grand Avenue from Grand River Avenue to South Street.  I'll be stopping by as often as possible and will post updates.  Check back for more. 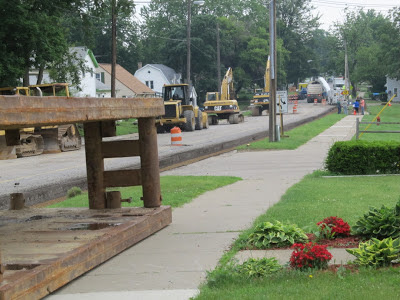 The rainy weather has slowed things down a bit, but about half of the parking lot in the northeast quadrant was done as of Wednesday afternoon.  More to come. 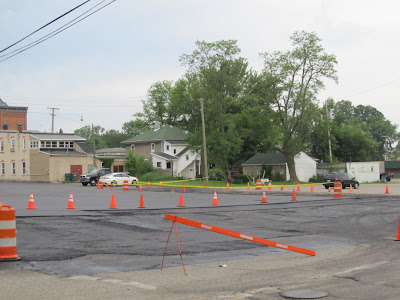 Has anyone noticed the new sign for Game Links?  Looks pretty nice. 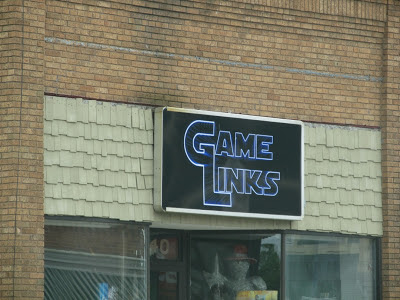 This gaming business is located in the brick building at the southwest corner of South Second street and East Grand River.  When this building was constructed, it was first used as a movie theater, showing silent films and then eventually talkies.

Many will remember this building as Line's dime store and then the V&S Variety store.  Following is a picture of the building in the early 1900s when it was a Reo dealership: 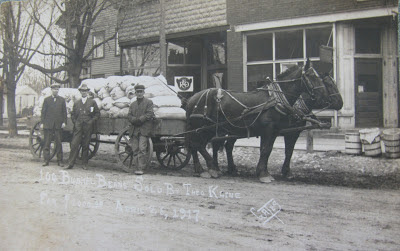 Note how the front has been changed -- windows and front.  The storefront to its right (west side) is now the eye doctor's location.  The house at the left side (set back slightly) is the Defendorf house that used to stand right at the corner of the block.  One part of that house was moved to 701 East Grand River, a second matching part was moved to just east of the Citizens Bank (soon to be called First Merit), and the doctor's office was relocated to 235 South Collins Street.
Posted by amuse me at 1:00 AM No comments:

The parking lot across the street from the library and located behind the storefronts in the northeast quadrant is getting a new layer of asphalt -- thanks mainly to a project soon to start on North Grand River.  Patrons of these stores will have to access the businesses through their back doors or walk around the block to the front doors as North Grand River will be closed while sewer and water work is done.

Following are a couple pictures taken this morning showing the old layer: 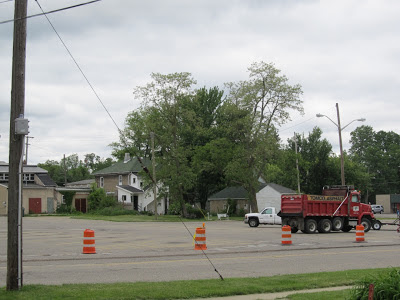 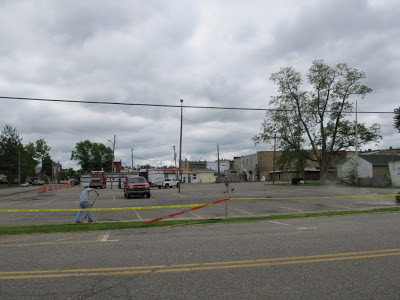 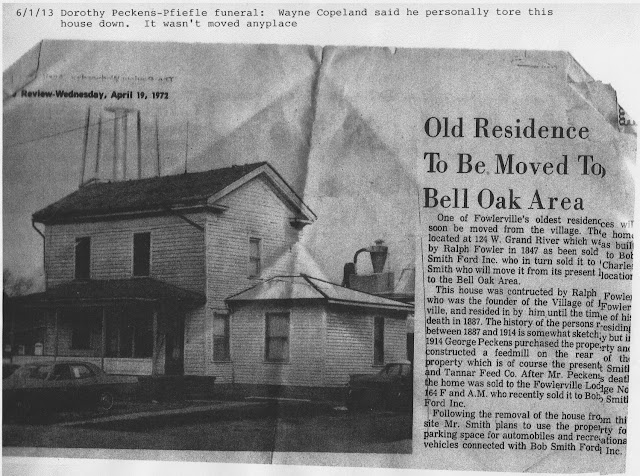 At the recent funeral for Dorothy Peckens-Pfiefle, a reader of this website was given a copy of the article published in 1972 of Ralph Fowler's house, located in the northwest quadrant, of the structure's possible removal to Bell Oak.  In fact, this house was demolished instead of being moved.

The house sat at about what is now the corner of North Ann Street and West Grand River, where for a couple of winters an ice skating rink had been created.  After the Peckens no longer had this property, some may remember this corner where used cars were displayed.

Information like this -- and so much more -- can be found in my two books, The Fowlerville Chronicles and Through the Eyes of a Country Editor.  (How's that for a hard-sell job!)

As a favor, I would love to ask anyone having articles and/or newspaper clippings from days gone-by, please contact me and I'll add them to the site.  It is great to keep this information available for anyone doing research.
Posted by amuse me at 4:24 AM No comments:

It has been horribly long since the last time I've posted anything -- and for that I apologize -- but I am working on a project that is taking nearly every free moment of my time.  I will get back to this website soon.

But for now, I did want to post a picture of the large square house on East Grand River that has been a lovely lavender shade for so many years.  Over the last few weeks, the couple in this house has been spending countless hours scraping and mending and then repainting the wood.  In only a few short more days, we will be looking at the front of the house a solid light teal shade and it is looking wonderful. 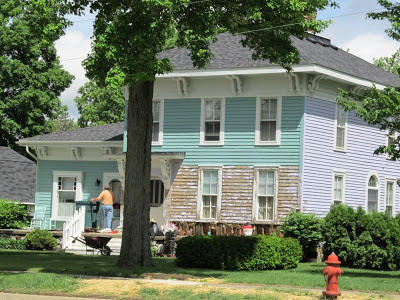 There are a number of houses in the village that have been going through renovations and freshening up -- that is just great to see.  Keep up the great work!
Posted by amuse me at 9:28 AM No comments: