The proof copy has arrived! Additional copies will be coming in a few weeks -- newly set-up as an 8.5x11 hardbound book. All the same great information but even better than the paperback from a few years ago. Message me if you'd like me to reserve a copy. And, please share -- Fowlerville has a lush history and this book has so many pictures, you almost feel like you are stepping back in time. Thank you to all that have been great over the years helping get this book this far! 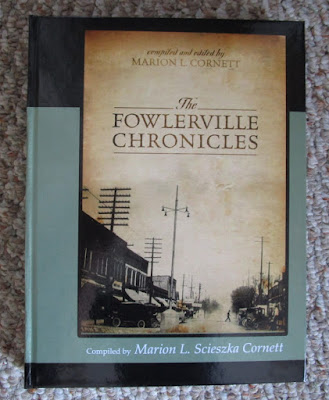 If you'd also like to go to my author page on Facebook, click here and message me to reserve a copy.
Posted by amuse me at 6:23 AM 3 comments: 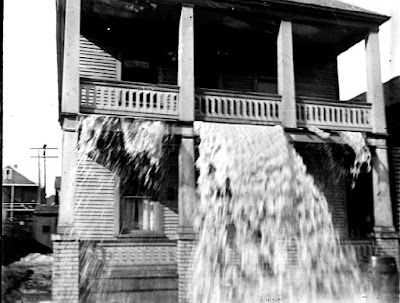 This is not a Fowlerville house (as far as I know) but probably located in the Detroit area around the late 1920s, early 1930s, as I got permission to post it from another website.  The picture shows a raid by the police, where barrels were tipped over, causing a waterfall of illegally-gotten or illegally-made alcohol during the years this country was supposed to be "dry."  Isn't this just a most interesting picture?

Part of the reason I gravitated to it was because my first historical novel, "Juniper and Anise," is about a woman bootlegger.  During the writing process, I tried to visualize the old farmhouse she operated out of.  In my story, I placed it just north of town and the house looked a bit like this one.

The other reason I wanted to show this picture was to make mention of my two novels, "Juniper and Anise" and "Tilly Loves Johnny," both available through the publishers, on Amazon, Kobo, Barnes and Noble, etc. and to let you know I am in the process of having my local history book, "The Fowlerville Chronicles," reprinted as a hardbound.  I will have the proof copy shortly and will then be offering it for sale, here on this site as well as at a couple local venues.  Be sure to check it out!
Posted by amuse me at 6:26 AM No comments: 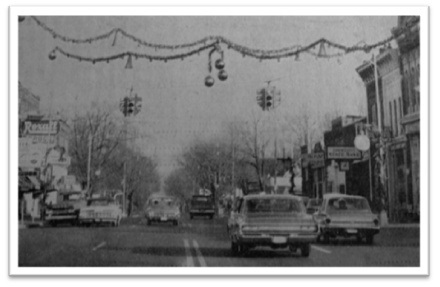 I am wondering if my readers could help.

The other day I had someone ask if anyone remembered Christmas decorations strung across the main four corners intersection along about the 1970s and 1980s.  I found the above picture from 1963 (no snow) looking eastward.  I'm not sure that's what they were referring to so I am wondering if anyone remembers other decorations during that era.

I would love to have you comment and I will direct that person to this site to read up on your memories.