Two old photographs -- probably taken within a few years of each other in the early 1900s -- show the North Grand Avenue side of the northeast block.  The last one is a current-day photograph, taken a couple weeks ago, and shows how much this string of buildings has changed so much.
In the late 1800s and early 1900s, the Bell opera house was a popular place and a great deal can be found both in my book and on this website, as well as a pamphlet put together by Richard Hutchins in 2002.  This meeting hall was located in the second floor, the first eight windows from the left side.  The first and eighth windows are above the two staircases leading up to the second floor.  The stairway on the south side still exists but has been totally blocked off.  The one on the north side also exists but both doors are securely locked.  In the modern picture, the doorway can be seen next to Olden Days Cafe.
At some point, the north side of the opera house became a 'billboard' of sorts.  If you look closely even today you can see faint lines of paint still on the brick. 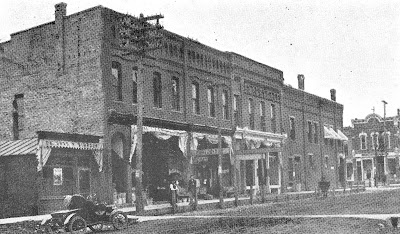 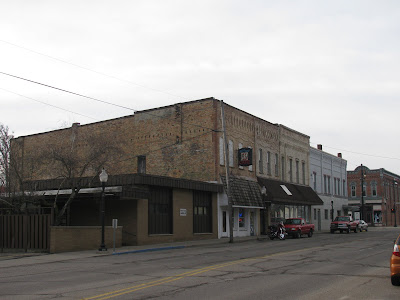 There is one change on the facade of one building I have not been able to figure out.  The building, which was incorporated into the storefronts where Maria's School of Dance entrance is (half of the building on the south side of their canopy), looks slightly different from earlier years.  At one time, the lettering of 'Place and Gale' was a part of the stonework just below the roofline.  It can best be seen in the top picture.  It is no longer there -- was it chipped off or was it something removeable?
Posted by amuse me at 1:00 AM