Three tramps, two women and one man, entered the residence of Mr. Chas. Fowler on Tuesday of last week during the absence of the family and stole a bed quilt, five sheets, some dresses and a cloak. They were arrested for larceny, but the complaint was changed to vagrancy when the jury brought in a verdict of not guilty, the evidence on that charge not being sufficient to convict. The most of the stolen goods were recovered. 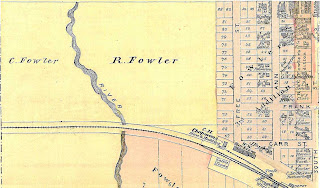 In an 1875 map of the Fowlerville area, a great deal of property, just west of the Cedar river branch running north and south on the west side of the village, is shown as belonging to C. Fowler. I'm assuming that meant Charles Fowler. When I came across the article of breaking and entering, published in The Fowlerville Review, I thought it was a good example of how things maybe weren't quite as innocent as we like to think.