When G.L. Adams began The Fowlerville Review, his first location was on East Grand River in the northeast quadrant. Eventually he settled his operation on North Grand Avenue. But in these early years, he was located on the second floor over McKeever's Saloon. This definitely put him close to action when the following happened and was reported about in the newspaper:
On Wednesday evening, about half-past nine o'clock, the usual quiet of our village was disturbed and the inhabitants thrown into a state of excitement by the alarm of fire. In a great deal less time than it takes to tell it, the streets were aswarm with men running, with pails in their hands, in the direction of the fire, which was discovered to be in the front of A. Barnard's Grocery, on the corner of Grand River and Second streets, two doors east of the Review office. The alarm was first given by Mrs. Jesse Pulver, who lives over the grocery, and was soon followed by parties on the outside, who discovered flames bursting from the top of the battlement. In about five minutes the hook and ladder carriage was on the scene with a good supply of pails, which were made good use of. A copious supply of water was applied and the flames were soon extinguished. The fire is supposed to have originated from a bracket lamp in the front window of the store, it being pretty close to the ceiling, having ignited through a crack with the rubbish that generally collects between the outside and the walls of buildings. The damage is slight.
This article caught my eye for a few reasons; not just because it entailed another of many fires that have swept through the downtown area but because of some of the information it provided to the placement of businesses.
-
I was fortunate enough to find an assortment of directories in the historical collection, which I included in my book, but none of these showed their locations since numbered addresses were not in use yet. Nellie Glenn, Fowlerville's historian in the mid-1970s, did make a list of possible businesses to go with the well-known picture of the 1876 wooden buildings of the northeast quadrant (page 35 of my book). There was no mention of Barnard's grocery but she did list the post office and the corner building belonging to Pullen (#1 in the map). So does that mean Pullen owned the building A. Barnard was operating his grocery business out of? 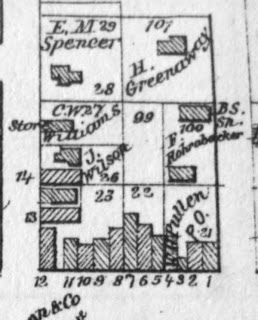