As I stood as far back on the southwest corner by the empty buildings that used to house Herbie's Used Car Sales, I tried to replicate the old photograph taken somewhere around 1900 and republished in the Fowlerville News and Views a few years ago.  My current-day picture turned out not to be quite as all-inclusive as the old photograph -- it almost appears that picture was taken with a panoramic view.  The changes are still noticeable. 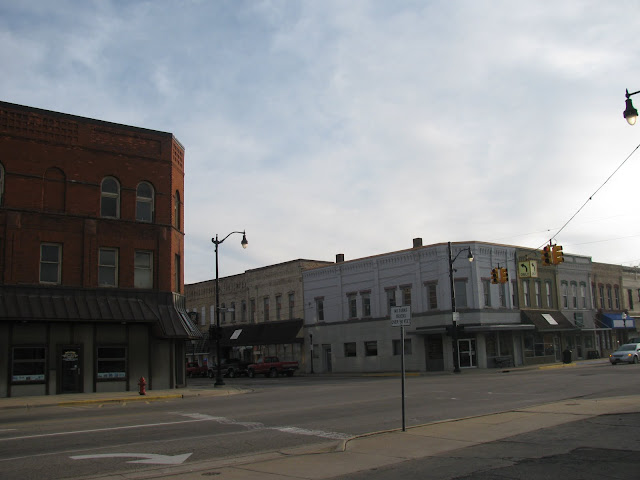 ﻿One thing I do like to point out to anyone looking at the early 1900 photograph is to look closer at the bottom of the picture.  A shadow can be found.  That shadow is of the old Commercial Hotel, a brick, 2 1/2 stories above ground and 1/2 story below ground building that was finished in 1880 after the Reason House burned to the ground in 1878.  The Reason House was built in 1852-53.  It was also known as 'Independence Hall' -- reportedly dubbed by an early ancestor of the Curtis family when Benjamin Curtis swung and crashed a bottle of whisky at the building.  Somewhat like christening a ship.
The Commercial Hotel stood until 1937 -- you can find out more about that building, such as how it was used and why it was torn down, in my book, The Fowlerville Chronicles.
Posted by amuse me at 1:00 AM