After taking yesterday's squint shot of the east side of North Grand Avenue, I walked over to the front of Olden Days and turned back.  Today's 'then and now' shots show the southwest corner of North Grand Avenue and Power Street.
In the late 1800's, the three-story building at the corner was built to house the burgeoning fire company, the 'lock-up,' and eventually the first library.  In later years, an opera house on the second floor became a community room, and the third floor was used by the Masons.
The one-story building just south of this building is of especial interest to me as it was the printing office of The Fowlerville Review, edited and published by G.L. Adams from 1874 until 1929.  Mr. Adams and his staff were ambitious, interested in their community, and felt the need to report everything -- I mean, EVERYTHING.  Those years of the newspaper has such a wealth of information, I could post articles for years! 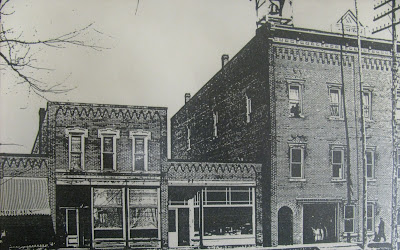 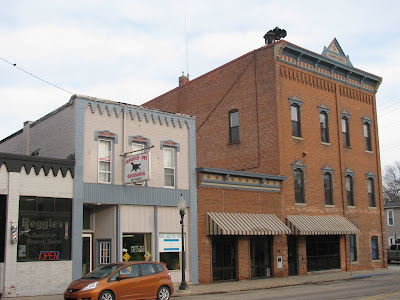 Today, Handy Township uses the first floor of the three-story building and the one-story structure for their offices.  The community room is now storage, and the third floor sits nearly empty, except for remnants of the Masons; i.e., carpeting, a stove, and a few odds and ends.
Posted by amuse me at 1:00 AM