Today's squint shot is sort-a-kind-of a 'then and now' shot.  As the history was written, sometime around 1892, after the big fire of 1891 that burned the Palmerton Block, F.J. Cook built his hardware store just to the west of the new Palmerton building.  In my book, The Fowlerville Chronicles, there are schematics shown of the actual architect's drawings for the Cook building, provided to me by Doug Burnie. 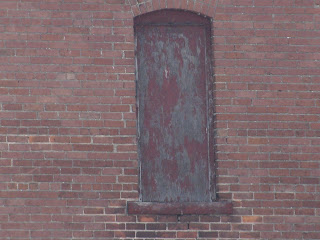 By 1915, another building was built just to the west of the hardware store (which is now also part of Fowlerville Hardware) and is not shown in the sketch below.  But I am wondering, is this 'window to nowhere' on the side of the building built around 1915 similar to one of the windows that is shown in the sketch below, on the west side of the building?  If so, that explains why I'm using these two pictures for my 'now and then' theme.  Your thoughts? 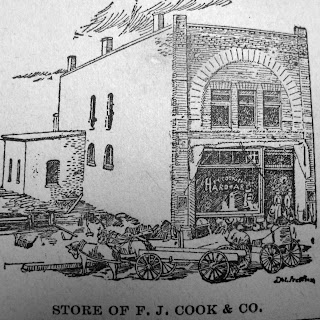