In 1891, a devastating fire burned all of the wooden structures in the northeast quadrant of the downtown area, and then it jumped over North Grand Avenue and burned the first brick structure of the Palmerton block.  The original wooden structure built at the northwest corner burned in 1876.
By 1892, a new brick building stood proudly, and was highly-written about in the local paper, at this corner, and it stands there still today -- known as the Harmon block.  Well, really as the building that houses the Harmon Real Estate but wouldn't that just be fun to go back to how the buildings were named -- by owner -- and call this the Harmon block.
On a cold Saturday morning, a few weeks back, I took numerous squint shots for this 'then and now' series, starting with this corner.  Over the next couple of weeks, you will see my progression as I walked around the downtown and replicated many of the older pictures in my book, The Fowlerville Chronicles. 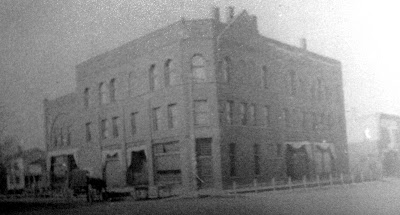 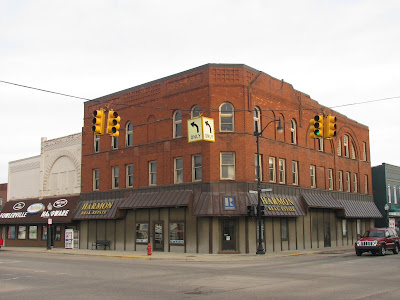 A couple of differences of note in the pictures include the fact the peak that can be seen on the east side of the building in the old picture no longer exists.  Also, the only building to the west (other than Ralph Fowler's house) shown in the old picture was the only other storefront.  In current times, two more brick buildings now stand.
Posted by amuse me at 1:00 AM