Earlier this year, I posted numerous pictures of houses in the village.  One was of Ford Grostic's home, and you can check out that article by clicking here.

Well, now I have a little more information regarding Ford Grostic.  About mid-summer, I had the pleasure of having breakfast with a long-time resident of the area.  I'm happy to say he is one of my readers and, in the interest of keeping this website as accurate as possible, he offered up some information to update some of my articles.

Ford Grostic was the supervisor at the Detroit Creamery on South Second Street at the railroad tracks.  Following is a picture of the creamery sometime during the 1940-50s: 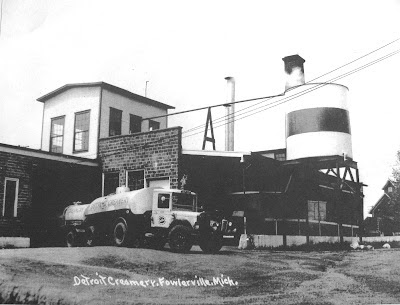 The building was used for storage in later years and then finally torn down in 1998.  But back to Mr. Grostic.
He and his wife had two girls (Thelma and Ione) and one son (Marvin).  Some may still know or remember Thelma Grostic, who became Thelma Rossetter.  She and her husband ran a bakery in town.  Ione became Ione Simpson.  Martin was a runner; he set a record at the Howell High School by doing the 100 yard dash in 10 seconds.
If anyone else would like to add more updates, please feel free to leave a comment.
Posted by amuse me at 1:00 AM