~~At the corner of North Ann and West Grand River, a Western Oil/Mobile gas station called the Flying Red Horse stood for many years.  Merle Stowe was the owner and Admiral MacKenzie was an employee -- anyone remember them?  Filling a car sounds interesting.  A large glass ball would be filled up by hand-pumping the gas, then the fuel would be released and drained into a container or car.

~~After World War II, in 1946, Cecil Lepard building a new building to sell Chevrolets (current-day picture of building below).  He would use one side of the building and the other side was the Dixie Inn, run by Fernon Gillis.  According to this reader, the Dixie Inn served the best country-fried chicken.

~~The restaurant also served as a truck-style stop.  Wholesale oil and gas was available, as well as oil changes were offered.  For the oil changes, a pit had been dug and created where the men would work below ground with the car above them. 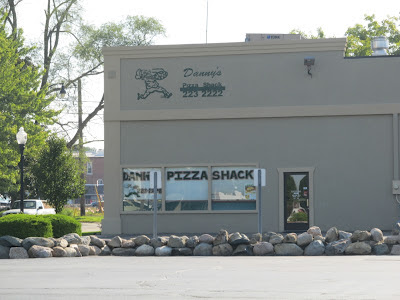 ~~The property along Veterans Drive (formerly Detroit Street) was mostly vacant in the early-to-mid-1900s.  By that time, the Commercial Club was quite active in the community and that organization owned quite a bit of the property along the then-Detroit Street.  To help encourage companies to relocate or start-up in the village, the club would offer a parcel of land at no cost as long as the company set up shop, ultimately employing local residents.

More tomorrow, but on the north side of West Grand River Avenue.
Posted by amuse me at 1:00 AM