Following is a picture of the early members of the Fowlerville Cornet Band: 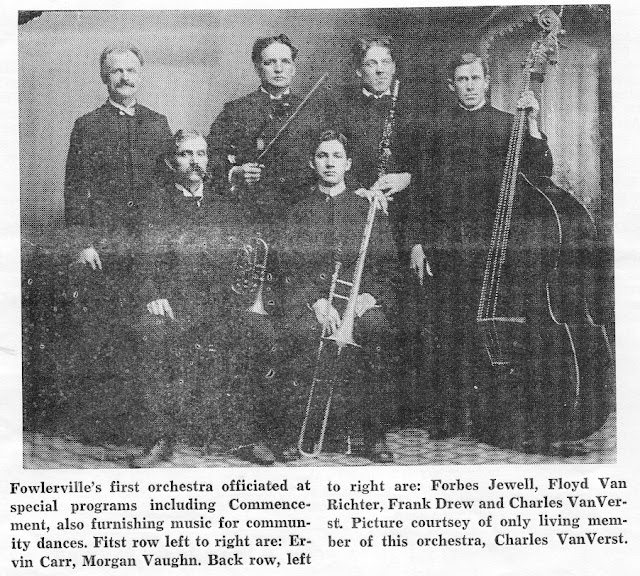 I recently met up with a long-time resident of Fowlerville -- well, this is the third or fourth time we have met up -- and he gave me all sorts of wonderful information on the village.  I will be passing along so much of this information in the near future but for now, I looked back at my notes remembering he had mentioned Charles VanVerst.
In the above caption, it is mentioned he is the "only living member of this orchestra" in 1961.  By this time, he would have been 86 years old.  At this age, he was well-known around the village as the chaplain for the Masonic Temple and he would spend nearly everyday on the third floor of the building at the southwest corner of North Grand Avenue and Power Street.
I did a quick genealogy search on Charles VanVerst and found he was born in May, 1875, in Michigan.  His parents, John and George Anna, came from New York.  By 1910, he was married and his wife, Mary, and he had two daughters, Ruth and Helen, 9 years and 6 years old respectively.
Posted by amuse me at 1:00 AM