As one of my readers and I wound our way through the village -- him offering up numerous memories of growing up in the 1950s and 1960s -- we found ourselves on Veterans Drive, heading toward where he used to work when Utilex was in operation.
A couple of years ago, as I did research for The Fowlerville Chronicles, I came across articles regarding two towers in the Fowlerville area which would be manned by observers watching the skies for any unwanted intrusion by enemy planes.  Following is one of the articles I found published in 1954 in the local newspaper: 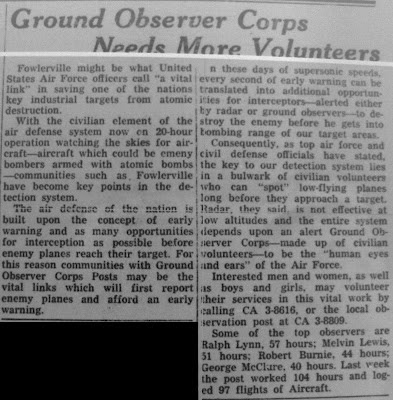 I asked my passenger if he remembered a tower on Veterans Drive, and he did.  He remembered it as being located about where the large green building, just south of CarQuest, is now.  All of this area on the west side of the road was an open field in the 1950s, except for the tower.

He mentioned having been in the "roost" at one time, being able to check out a poster with all of the different airplanes to be on the look out for.  Wouldn't that be something to see a copy of that poster?

An additional article found in The Fowlerville Review in 1954 read as follows:

This week the post averaged 105 hours and better.  Post Director, Melvin Lewis, said that he hoped to go on a 24-hour schedule after the school of instruction is held.  This school will be held on December 16, at 4 pm and at 7:30 pm.  It is hoped that all volunteers who are interested in joining the Ground Observers Corps will attend, along with all regular Ground Observers.

Coffee and cocoa have been made available to all Observers.  It is paid for on a donation basis.  All volunteers that want to join, call Melvin Lewis.

One article reminded the village residents of the importance of this work in giving "warning in case of severe storms, including tornadoes."
Posted by amuse me at 1:00 AM