In 1922, the Sanborn & Company from Chicago surveyed a majority of the village and provided wonderful detail of the sizes of the buildings and how they were used at that time.  The southwest corner of Power Street and North Grand Avenue is what we will be looking at today.  Following is a portion of the surveyor map: 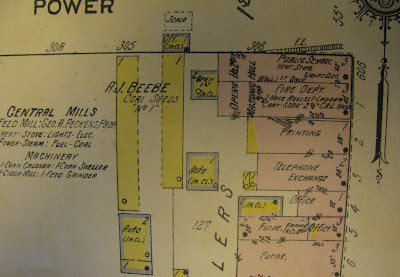 The portion of the map in pink at the upper right hand corner shows the fire department and public school rooms.  The white wooden schoolhouse had burned down the year before and a part of this three-story building was being used as classrooms.  The second floor was called the opera house.
A yellow square at the back of the building indicates a room that no longer exists.  It used to be a wooden structure accessed from the second floor, with pillars supporting it to the ground.  At times this small room was used as a dressing or changing room for those using the opera house for plays, oratories, etc.

If you drive or wander behind that building now, you can see evidence of how the back brick wall has been changed and patched over the years.

A couple more bits of interest now that we are looking at the map:

~~Dr. Lamoreaux's office was where you see the number 4 on North Grand Avenue.  On his window, he had had stencilled, "Chronic Disease a Specialty."

~~The garages indicated with "auto" no longer exist.

~~A.J. Beebe sold coal.  He lived on East Grand River in the Craftsman-style house just west of the Kennedy house.  By 1923, A.J. Beebe sold his interests and moved to California.  The following article was found in the local newspaper:

Mr. and Mrs. A.J. Beebe left Monday for their new home at Santa Anna, California.  They have resided in this village something like 40 years, during which time Mr. Beebe has been actively engaged in some business enterprise and it will seem strange to know that they have gone out from among us at their time of life, but they have spent a winter in California and are very much taken up with the climate there.

And then, they moved back to Fowlerville a year later.  No explanation in the newspaper.
Posted by amuse me at 1:00 AM