A short time ago, I posted some information on the Zimmermans' 50th wedding anniversary.  One of my readers -- as a matter of fact, the daughter of Lynn Zimmerman -- sent me a clearer picture of Minnie and Neail Zimmerman. 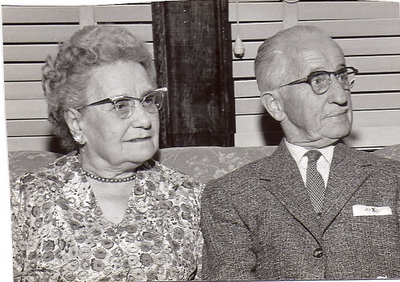 In our e-mails back and forth, she provided some additional information.  Some may remember, the Zimmermans lived in the house just west of the lumberyard where now the west edge of a parking lot stands.  The house was torn down a few years ago.  Originally, Neail was from Missouri and Minnie from Ohio.  They moved to Fowlerville from Rockford, Ohio, when Neail and his brother-in-law, Walter Lewis, bought the lumber yard.  From my research, that was around 1926.

An additional note my reader provided was about Lynn Zimmerman.  She wrote, "as my dad's disease progressed, he was glad to have 'familiar' things around him.  Rotary Club and singing would have been two of those things.  At Dawn Patrol, he would usually cook eggs, and one year, as a joke, my mom served him egg salad sandwiches for lunch afterward.  He sure enjoyed his time through the years with the club and its members.  He and my Uncle Ed both loved to sing, and they were in the Fowlerville Follies as part of a quartet."

I joined Rotary in 1999 and had a chance to meet Mr. Zimmerman a couple of times before he no longer attended.
Posted by amuse me at 1:00 AM

FYI to my 'cousins.' I have Neail and Minnie's picture album from when they met in Montana.

I have been looking for information about my grandfather, Orman Vaughn (Von) Risdon, who was a builder and got his materials from Neail Zimmerman. The house that you mentioned that was behind Mr. Zimmerman's lumber yard I think is the house my grandfather built for him. Would anyone have any information or a picture of the house and lumber yard?