The other evening, while being served some clam chowder, the conversation turned to other fish and seafood, such as oysters.  I mentioned how, in the early 1900s, oysters and canned fish were commonly found in mid-Michigan.  Quite often, lunchrooms advertised specials for oyster meals and some early benefit meals (fundraisers) were oyster-feasts.

I came across this ad from Copeland and Griffin in The Fowlerville Review, January 5, 1916, issue--a hundred years ago. 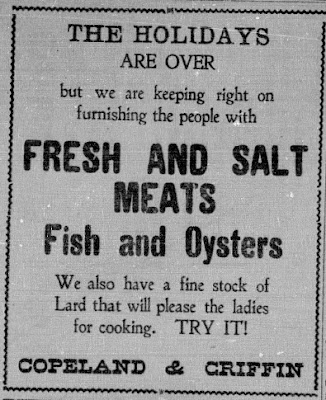