Just a pile of rubble.  That is what you'll find at the southeast corner of East Grand River and South Collins Street. 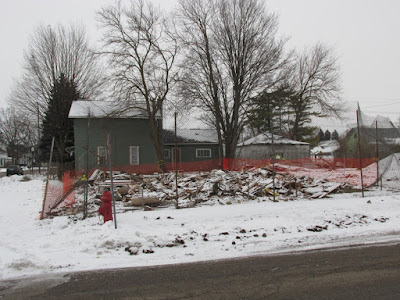 A few years back, this building was operated as Hill's Sporting Goods.  After Frank Hill's passing, the building went into further decline and sat unused.  Makes me wonder what this lot will become, now owned by Ion Electric.

For a bit of history, in 1875, this lot was owned by A.W. Cooper.  He was a local druggist.  Following is a plat map showing his ownership in the upper left hand corner:

Eventually the building (the one just demolished) was built on this corner lot and used as a gas station/restaurant.  Some of that history can be found in my history book, "The Fowlerville Chronicles."

Following is a picture from 1973 when Dan Eldridge owned the building and used it for a gas station/towing business: 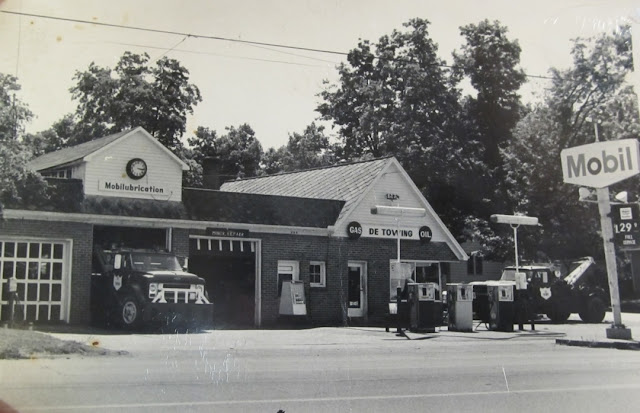 Fun information from a reader (names have been changed to protect the innocent!):

Right after Bob and I signed the papers and became owners of our house we realized our address would be Fowlerville and we had no idea of what 'our town' looked like. So, off we went. We came into town and I don't know if I didn't notice any periods after the D and the E or if there weren't any but I said to Bob, "What is de towing mean?"

Without skipping a beat, he says, "It means: I do de towing, I do de gas, I do de windshields . . . " That was our introduction to this great little town.

I love your pictures!

Actually the property is owned and maintained by JMJ Holding. Nothing is planned for the lot in the near future, other than trying to grow grass.

Actually the property is owned and maintained by JMJ Holding. Nothing is planned for the lot in the near future, other than trying to grow grass.