"Tilly Loves Johnny" is a murder mystery set in a small town called Cedartown, that looks a lot like Fowlerville.  It is set during the Prohibition Era, same as "Juniper and Anise."  If you read my first novel, you will recognize a few names in the second one but the main characters are all new to this story.

The back blurb reads: 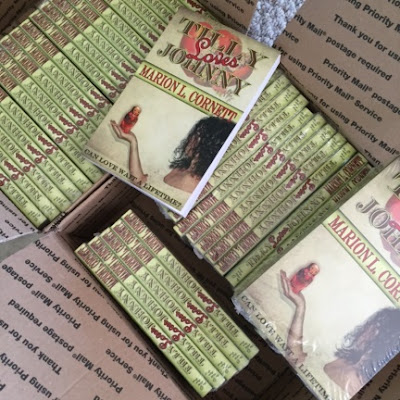 "Newlywed Tilly Miner turns a deaf ear to rumors and gossip her husband, Johnny, is running parties where 'complimentary' hooch loosens lips as well as pocketbooks for those looking to gamble.  Some nights he crawls into their bed, smelling of sour rye mash; others, not even making it home until early morning.  But her loyalty remains unwavering.  And then, the unspeakable happens.

"A few days before Christmas, Tilly discovers a bloody atrocity dumped on their kitchen table.  A warning from the Ku Klux Klan?  Johnny laughs it off as a joke.  But, when he goes missing one cold night in February, 1929, Tilly is convinced someone or something prevents his return.

"Her undying faith in Johnny is tested by righteous attitudes from her best friend's mother and a too cruel mother-in-law, while a recalcitrant sheriff is convinced the man merely ran off."

The ebook will be available on Amazon on its September 23rd release but paperbacks are available through my author website at www.marioncornett.com.  Would love to have you check out the website.