In 1896, electricity was now becoming very popular, with some wires and facilities having been installed four years earlier for some of the local residents.  One of the early entrepeneurs in this venture was Edward Greenaway and, once he had gotten everything going in Fowlerville, he reached out farther than the village to make more money and a difference in early pioneers' lives.

One such instance was illustrated in an 1896 article in The Fowlerville Review: 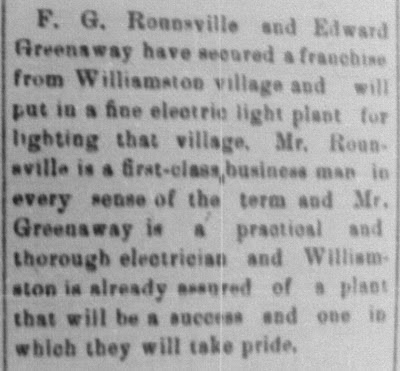 Additionally, an article was republished in the local paper from the Williamston Enterprise:

Messrs. Rounsville and Greenaway were in town last Monday and purchased the Crostic lot, corner Putnam and High streets, on which will be erected the power house for the electric light plant.  The lot has a frontage of 75 feet on High street and 72 feet on Putnam street.  The building will be 32 by 40 with side addition.  The machinery will be driven by an 80-horse power engine.  Work on the building and setting poles will be commenced as soon as the material can be placed on the ground.  Mr. Greenaway will leave for Chicago today (Wednesday) to purchase machinery.  He will visit Springfield, Ill., and Cleveland, Ohio, before his return.

It wasn't long after this that men from the village of Dexter came to Fowlerville to talk with Messrs. Rounsville and Greenaway and to inspect this village's electric light system.  Word was spreading and other villages wanted in on this novelty.

But, sometimes, there were drawbacks as described by G.L. Adams of the local newspaper:

As everyone knows who has driven into any village lighted with electricity, it is almost impossible for one to see an object in the road, hence the necessity of each driver to keep to his own side of the road.  Every road coming into this village has two tracks and those driving to the village or going out should each keep the right hand track and thus avoid all danger.  Perhaps the right hand track may not be quite as smooth as the other side, but your only safety is in keeping your own side.  This advice costs you nothing, but if followed, may save your life.
Posted by amuse me at 1:00 AM