I recently had the opportunity to spend a few hours inside the Coughran School House, now located at the fairgrounds historical village. I learned quite a bit of trivia about the building itself, which I thought I would pass along here. The first picture shows the second school building used as Coughran School in 1908. A list of teachers inside the school shows classes began as early as 1854, but as stated in the history shown below, there was a building used before the one shown.
-
There were two entrances to the school; one for boys and one for girls. The teacher's desk was inside between the two doors, where a rope was extended from the school bell to his or her desk which was pulled to announced the beginning of the school day. 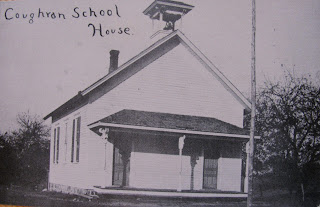 The second picture, taken sometime in the 1950s, shows how the two entrances had been blocked off, and windows inserted, and one center door was used. The two previous entrances were now lined with hooks for outerwear. In later years, when the outhouses were no longer used and indoor plumbing provided, separate bathroom facilities could be found in each area for boys and girls. 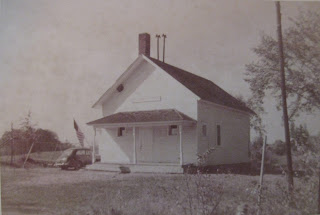 The front of the school house faced to the east and the back wall consisted of nearly all windows. As shown in this classroom picture, sometime in the early 1950s, students sat at their desks and would have been facing north. The light from the west windows would shine on their work papers, making lighting optional. (Note: If any of my wonderful readers recognize themselves in this picture, please let me know -- how fun would that be.) 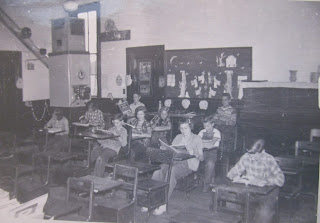 The school closed in 1962. I did not find any information that the building was used for any other purpose but I did hear a few anectodal stories that it was vacant for a very long time and even appeared a bit "scary" to a few. There were broken windows and creaky floors, overgrown weeds, and the inside was dark and gloomy.
-
So the building sat there until 1989 when the historic society took control of it, moved it through Fowlerville, and secured the wooden structure on a new cement block foundation. The shed on the south side of the building did not make the move. In my book, The Fowlerville Chronicles, you will find a picture of the building, secured on a flatbed, as it trailered through the main four corners. 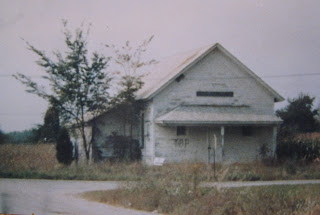 This last photograph, taken just a few days ago, shows the empty lot at the northwest corner of Chase Lake and Owosso roads. 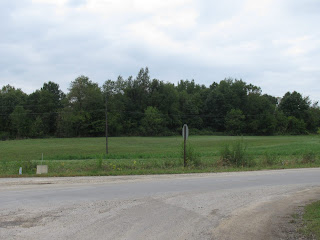 Finally, I did reproduce the "History of the Coughran Schoolhouse" for your reading pleasure. It is a wealth of information . . . enjoy. 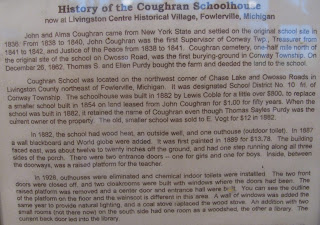