The entire month of October will be dedicated to some of the pioneers that helped to build Fowlerville. Yesterday, we started off with squint shots of the tall headstone marking the four Fowlers that first arrived in this area.

Martha Smith Fowler, b. 1808-d. 1846, was Ralph Fowler's first wife. According to Mike Grimm's website, Fowlerville History, Martha was 23-years old when she married Ralph. They had six children -- George, Lucy (both of whom were born in New York), Charles, Joanna, Walter B. (died in infancy), and Walter. Martha passed away while Walter was still an infant. 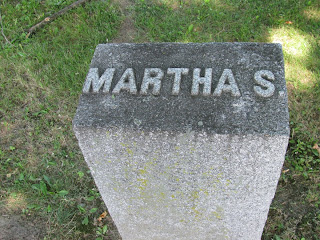 John B. Fowler, b. 1811-d. 1842, was two years older than Ralph. The two of them made the initial trek to the Michigan Territory to check out the possibility of relocating from New York. John passed away a short six years later. 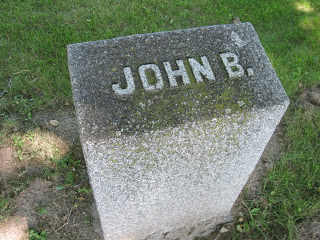 When Ralph was 69-years old, he composed The Pioneer Sketch, which was published in its entirety in The Fowlerville Review. He spoke of the early years. In one paragraph --
-
On the first of May, 1837, Mr. John B. Fowler and family, Ruel Randall and wife, and John A. Tanner, then a boy, arrived in town, having came through Canada with ox teams. The first Sunday morn after the arrival of John B. Fowler, we strolled through the woods and came to a clear spot of about an acre where there was a large oak tree; we sat down under the tree and talked of our mother who had been a Methodist all her days. 'Right here,' my brother says, 'if we live long enough, we will have a Methodist church.' When the plat was surveyed, the stump of the tree still stood, which was after the lapse of 15 years, and remembering the conversation of my brother and myself, I marked the lots for a Methodist church and in about twenty years the church was built on that site.
-
Both John and Martha would have been buried in the original cemetery, located in the 700 block on the north side of East Grand River. The Greenwood Cemetery was created in 1884 and those buried in the original cemetery were removed over a period of five to ten years to Greenwood. Tomorrow's squint shots will look a bit closer at Mary and Ralph Fowler.
Posted by amuse me at 1:00 AM