The Gale & Place store was located on North Grand Avenue, about where Frank's Market stood in later years before the Curtis family moved to their current location. 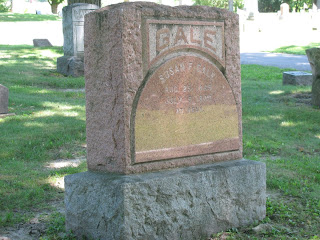 Mrs. W.B. Gale, a picture of which can be found in my book, The Fowlerville Chronicles on page 103, was very active in the local chapter of the Philomathean Club. The first meeting of the newly-formed club was held at the Gale home in 1898. Mrs. Joanna Palmerton, the daughter of Ralph Fowler, served as the first president of this club. Mrs. Gale passed away five years before her husband, William B. Gale. 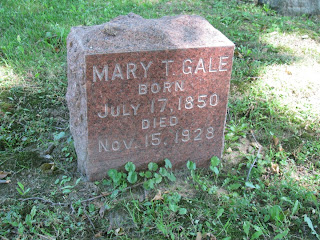 Mr. Gale's obituary was published in The Fowlerville Review, as follows:
-
Pioneer Resident Passes in Ohio~~Former Fowlerville Business Man was Resident Here for 50 Years~~Funeral services for Willilam B. Gale, 85, a former Fowlerville business man, who passed away suddenly lasst Wednesday at the home of his son, Harry T. Gale of Columbus, Ohio, were held Friday afternoon at 3 o'clock from the local Baptist church. The Rev. Carey Willett of Paw Paw, a former pastor here, and an old friend of the deceased, officiated, assisted by the Rev. H.V. Gould. Masonic services, conducted by the Fowlerville order, were held both at the church and at Greenwood cemetery, where burial was made in the family lot. In respect for Mr. Gale, Fowlerville business places were closed during the funeral services.
-
Mr. Gale was a resident of Fowlerville for more than 50 years and for many years was engaged in the mercantile business here. After selling his store, he was cashier of the Commercial State Bank for several years and was also in the insurance business. He was a member of the local Masonic lodge.
-
After the death of Mrs. Gale, five years ago, Mr. Gale went to Columbus, Ohio, to live with his son and daughter-in-law, Mr. and Mrs. Harry To. Gale.
-
The surviving relatives are one son, Harry T. Gale of Columbus, Ohio; one grand-daughter, Miss Virginia Gale of Dayton, Ohio, and one brother, Charles F. Gale, who is now in Florida. 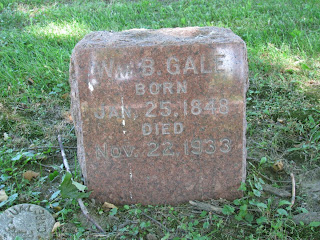 Two additional paragraphs were added at the end of the above obituary (some items repetitive):
-
Obituary~~William Bedford Gale was born in New York City, New York state, January 25th, 1848, and died at Columbus Ohio, November 22, 1933, at age of 85 years, 10 months and 23 days. He moved with his parents to Detroit when quite young, and at the age of 12 years, went to live with people by the name of Dixon, near Byron, Michigan. A while later, he went to Grand Rapids to work and from there moved to Corunna.
-
In 1873, he was married to Mary Thayer. About 58 years ago, he and Mrs. Gale moved to Fowlerville, where they resided up until five years ago, when Mrs. Gale passed away November 15th, 1928. Mr. Gale then moved to Columbus, Ohio, where he passed away November 22, 1933. He leaves one son, Harry; one grand-daughter, Virginia; and one brother, Charles F. Gale.
Posted by amuse me at 1:00 AM