There have been numerous photographers located in Fowlerville, including one currently in the old hotel. In the late 1800s and early 1900s, the names of N.H. Cathcart, W.Z. Ball, and eventually N.P. Jensen, were well-known and advertised weekly of their ability to record historical portraits and other family-setting pictures. "Preserve for future family members" seemed to be the mantra.

Recently, one of my readers dropped off a handful of portraits -- some from this area and others a little farther afield -- and I have digitally photographed them and will eventually get them on this website. For now, I wanted to show at least one artistic print on the back of one of the portraits. Many of the studios created elaborate sketches -- this is probably the last showy. N.H. Cathcart, photographer, also printed beautiful class graduation announcements, some of which will also find their way to this website.

For now, following are a picture and two articles, of which were found in issues of The Fowlerville Review in 1877, of three photographers in the area: 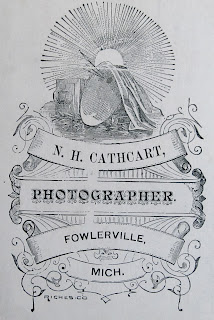 We recently had occasion to visit the photograph gallery of our fellow townsman, W.Z. Ball, and were shown some work in the line of chromo-photography that for perfect workmanship and elegance surpasses anything we have seen lately. We were not aware that we had an artist of so much skill among us, and it is to be hoped that since we have, he may be liberally patronized by the people.
And,
One day last week, a lady from the country stepped into Mr. Brown's photograph cars to have some work done. One of her eyes became somewhat irritable and, noticing a dish setting on the stove containing what she supposed to be water, she applied some of the fluid to it. The supposed water proved to be a solution of silver which in a short time began to turn black and the probability is that by the time she reached home she had a black eye that will probably stay by her for some time to come.
Posted by amuse me at 1:10 AM