We've looked at some interesting items in 1880, but now we are going to go back a year for a few days.
Oysters were very popular in the 1870s and 1880s in this area. I never came across information of where the oysters were shipped in from or how they came, but it appears there were nearly weekly oyster suppers put on, as evidenced by the following article published in the local paper:
The oyster supper given by the Odd Fellows of this place at the Exchange on Saturday evening last was a grand affair. Over 100 Odd Fellows and their wives partook of the supper which was one of the best it has been our prerogative to sample in many a day. After the supper, all adjourned to the lodge room where some very instructive and amusing remarks were listened to and all united in pronouncing it a time long to be remembered. About 30 visitors were present from Bell Oak Lodge. 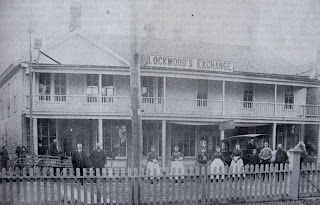 The above-mentioned "Exchange" was the Lockwood Exchange, located where the old hotel now stands. Before 1900, it was a wooden structure as shown above. After it burned, possibly from a kitchen grease fire, the brick structure was built, which still stands across from Curtis Grocery.
And that brings me to a final comment for today's article. For the last few years, the storefronts in the old hotel have seen shopkeepers come and go. The coffee shop changed hands and names numerous times but now stands empty. And now there will be another empty spot. The Treasure Chest is closed. In speaking with Jeff, the owner, it was just too difficult in this economy. There wasn't enough foot-traffic and lookers; just mostly people coming in wanting to sell their own items. It is sad to see yet another building with darkened windows.
Try as we do, we shop locally at Curtis Grocery, Fowlerville Pharmacy, Fowlerville Hardware, meals at Olden Days, Shear Image for monthly haircuts, Save-On for meat, but we are only two people. If everyone would commit to stop in each week and purchase something from each of our retail stores -- even if it is under a dollar -- can you imagine how we might help to make our downtown more viable and lively. Just thoughts from my soapbox . . .
Posted by amuse me at 1:10 AM