The following may appear to be a rather strange squint shot but I've offered it up more as a visual location.  Years ago, there used to be a large building in place of this one, part of it used for the Tiedeman hardware store.  At that time, a lean-to type building was on the south side of the large building.
According to one of my readers, the lean-to at one time housed a satellite operation for the Domestic Pickle Works out of Milford.  Local farmers would be contracted to grow cucumbers and bring them to this location for sorting.  The smaller ones were premium for pickles.
One story offered up concerned a "mooch" coming into the storefront, looking for any handouts.  He was even in the habit of just helping himself.  Well, one time, things went very wrong for him.  He dipped his hand into a bucket of white powder, probably assuming it was powdered sugar, when, in fact, it was alum for pickling.  Can you just imagine the pucker on his face when he crammed a mouthful in! 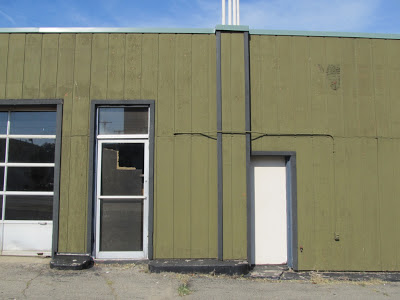