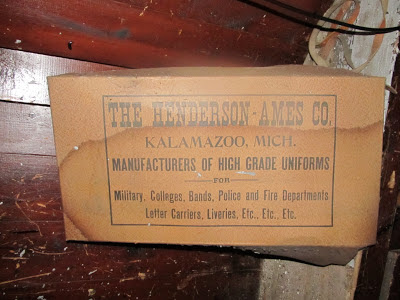 After checking out most everything on the second floor of the Harmon building, my fellow explorer and I climbed the massive stairway to the third floor; the location where members of the International Order of Odd-Fellows and members of the Masons would meet.

We wandered from room to room and I found more things to take pictures of which I had missed in previous visits.  In the cloakroom, we found this box cover.

My curiosity got the better of me and I did some research online.  I came across the following recap from one website for Frank Henderson:

Frank Henderson was selling and/or making swords, regalia and military goods from 1850 until his death in 1899 and his company, Henderson-Ames co continuing until 1923. From 1850 to 1871 he operated his business under his name, Frank Henderson, in Kalamazoo MI. In 1871, Henderson formed a partnership with Theron F. Giddings and started the Henderson & Giddings co. This only lasted until 1873 when the name was changed back to Frank Henderson. From 1873 to 1893 Henerson put out catalogs selling fraternal goods and began selling as an agent for the Ames Sword co. In 1893, Henderson consolidated his regalia company with the Chicago based branch of the Ames Sword Co. forming the Henderson Ames Co. In 1894, Henderson bought the Detroit regalia factory of E. A. Armstrong, including sword plant, stock, tools, machinery, furniture and fixtures. When Henderson died in 1899, his firm continued in business until it was purchased and dissolved by M. C. Lilley Co. in 1923.

So it would appear this box top has sat on the third floor, preserved, since as long ago as 1923.

I also found the following picture (taken in 2011) of the house/castle built by Mr. Henderson, located in Kalamazoo:
You can read more on the house and the Hendersons by clicking here, which will take you to a wikipedia page -- interesting read!
Posted by amuse me at 1:00 AM