If you check over the last week and a half of squint shots, you will see more shots of interesting things found in the no-longer-used second and third floors of the Harmon building and a part of the basement.
When my fellow explorer and I were on the third floor, he mentioned a Tiffany-style lamp that had been given to him years ago by George Monroe, a member of the International Order of Odd-Fellows.  As we looked to the ceiling of the ballroom, it was conceivable that some of the wires hanging down could have held the following lamp: 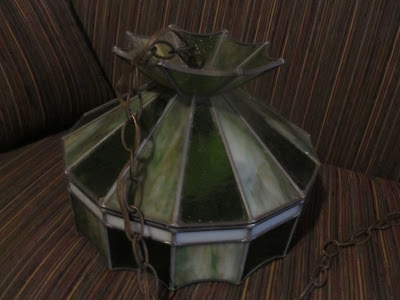 Some may know George Monroe.  He is in his 90s and lives on Power Street, just west of where the lumber yard used to be.  I had the fun of sitting and talking with him one day quite a few months ago, when I stopped (on a lark) to introduce myself.  He has a wealth of information and need to "stop on a lark" again real soon.
Posted by amuse me at 1:00 AM