Christmas in the 'Ville has become one of Fowlerville's major events.  There's the 5k walk/run and a 1-mile fun run, stores stay open later, carriage rides, food at the fire hall, and many more fun things -- including the whole day capped off with a parade.  Part of what is quickly becoming a tradition is the arrival of numerous hot-air balloons during the day.  By evening, the balloons are packed away but the baskets, with their flame-throwing ability, are put into exciting use as they are paraded through the downtown area, shooting fire high into the air.

In 1896, long before all of this extraneous fun, hot-air balloons were a huge part of figuring out the flight of humans.  The following article, published in the local newspaper, showed how Prof. C. Bartholomew was working on long-distance abilities of hot-air travel.  The questions I wish could be answered are:  1) was he successful, and 2) did any messages make it back to Jackson? 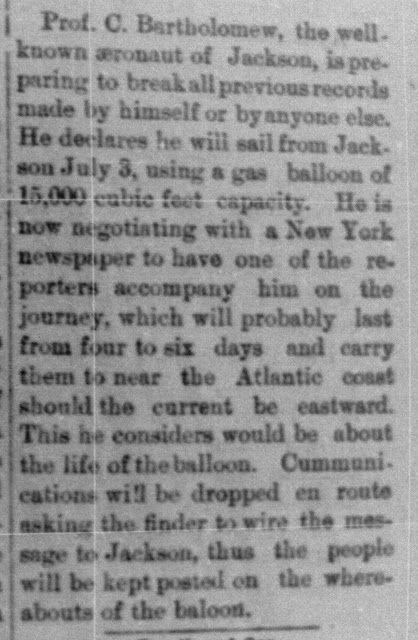 Out of curiosity, I did a little googling -- you know, type in all the relevant words in www.google.com, hoping for a hit -- and came up with the following from someone's travel blog:

While in Adelaide the dashing, and daring Professor C. Bartholomew got a chance to perform his aerial act. Dangling from a hot air balloon from a height of approx. 2,000 feet, the one-eyed dare-devil performed on a trapeze that was dangling beneath the balloon. He then leaped from the balloon strapped to a parachute. Unfortunately for the Professor his parachute failed to deploy properly and he slammed into the chimney of a nearby hotel. He unbelievably suffered only minor injuries, but was reluctant to perform for the remainder of the tour. 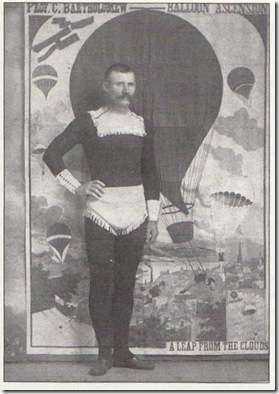 ﻿
And now that you know a little bit about ballooning, be sure to come out with everyone else to Christmas in the 'Ville this Saturday, December 1.
Posted by amuse me at 1:00 AM