Handy Township was named after Calvin Handy, one of the early settlers in this area.  In 1899, Henry Handy passed away.  The article from the newspaper follows: 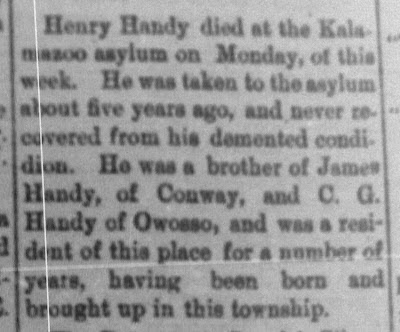 About the only genealogy work I've really done has been for G.L. and Carrie Adams for Through the Eyes of a Country Editor.  But, while researching for that book, whenever my eye would catch something of interest, or an obituary, or a commonly-known name for this area, I would keep track of those articles.

The Handy name caught my eye, but now I'm wondering if anyone would like to fill in the blanks on his genealogy, other than what was mentioned in the article.
Posted by amuse me at 1:00 AM