F.G. Rounsville was a successful businessman here in Fowlerville at the turn of the 19th century.  He operated the grain elevator at the railroad tracks at South Grand avenue and was operating it while living across the road in a large, spacious home his family built around 1878.

In 1897, someone decided what was Rounsville's was his also, as reported in an article found in The Fowlerville Review:

~~Bold, Bad Burglar~~During Saturday afternoon, the residence of F.G. Rounsville was broken into and about $75 worth of small articles stolen.  The house was ransacked from bottom to top and things generally overhauled.  The chisel with which the door was broken open was left laying on the dresser.  Cora Cardotte saw a man in the yard as she was passing the house and upon learning of the burglary, gave a description of him which was given to the officers and a diligent search was made among the crowd.  One person was arrested upon suspicion but proved not to be the party she saw and no further clue could be obtained.

I have a huge amount of information on F.G. Rounsville (and a picture from one of the yearbooks -- see below) and others in his family, but the name of Cora Cardotte does not ring a bell with me in all of the research I've done so I went looking on one of the genealogy sites -- still no luck.  Has anyone heard of her or this family? 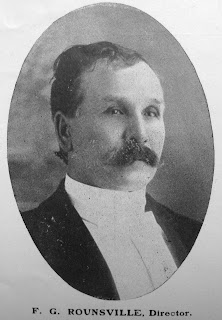 Cora Cardotte was the daughter of Dexter and Martha Cardotte. Dexter was a French immigrant farmer. Cora was born in Michigan in 1873, but in the 1880 Census they were living in Arkwright, Chautauqua County, New York. In 1900, Cora and her two brothers were living with their mother in Fowlerville.

Haven't yet looked for anything more. I'm working on the Henry Handy story.