By now J.C. Ellsworth, the local banker for Fowlerville, had owned an Estey organ for a year.  From the sounds of the letter below -- received from a local reader who now owns parts of the organ -- Mr. Ellsworth had worked his way through all the music he had and needed something new: 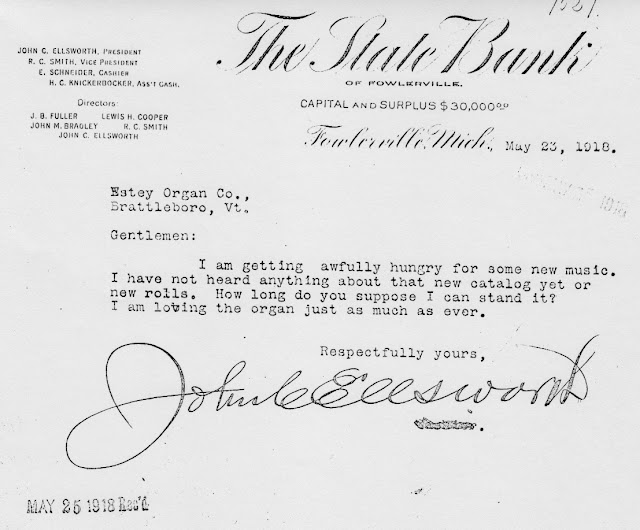 And, according to my reader that sent these copies, it would appear Mr. Ellsworth wrote the company on an average of twice weekly requesting more rolls of music for his pipe organ.  Wouldn't it be wonderful to know exactly what music he had and what more he received?

Tomorrow, more correspondence and information on J.C. Ellsworth and his Estey organ.

On a side note, it is interesting to look at this letterhead to see what community leaders were part of the bank.  One name jumps out at me -- Lewis H. Cooper.  He was was an earlier druggist following in the steps of his father.
Posted by amuse me at 1:00 AM

good morning....what a wonderful experience to hear about Mr. Ellsworth and he wonderful pipe organ which he enjoyed for so many years and shared with folks in town. Looking forward to the next installment.