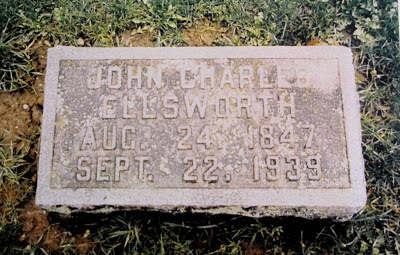 John Charles Ellsworth and his wife, Emma, had four children -- two daughters (Julia and Caddie) and two sons (Hanson and Alex).  He was born in West Burke, Vermont, near St. Johnsbury.

His obituary, as published in the local newspaper, can be found by clicking here.

Some additional information my reader from New Hampshire was able to provide was the following:

~~Miss Elizabeth Schneider worked for him for years in the bank and after Mrs. Ellsworth passed away, Miss Schneider moved into the house to help.

~~A Mrs. O'Connor served as a housekeeper.  (According to the 1930 census, Miss Schneider, who was born in Germany and at that time 48 years old, was one of three boarders.  The other two were Ella Bessert, age 21, and Mollie Connor -- probably the Mrs. O'Connor -- who was 73 years old and indicated she was born "at sea.")

~~In extensive journals my reader has, Mr. Ellsworth wrote of two different motor trips he, Miss Schneider, and son Alex made eastward.  According to my reader, "they would drive the car as far as Detroit, put the car and themselves on a boat to Buffalo then pick up the car there and one time drove to New York City, as there is a letter in the organ file to the fact that Mr. E. had been to the Estey studios to hear their pipe organ there and possibly order his organ at that time.  One time the car was shipped back to Fowlerville and the travel party went back by train.  How exciting this was about 1916."
Posted by amuse me at 1:00 AM