The Orr Theatre, formerly located where the west half of Doug Burnie's Tru-Value Hardware store now resides, was the place for boys and girls to attend a movie informing proper hygiene and getting a bit of some sex education. I'm fairly certain, by today's standards, this movie was pretty tame. Following is the article that was published in The Fowlerville Review: 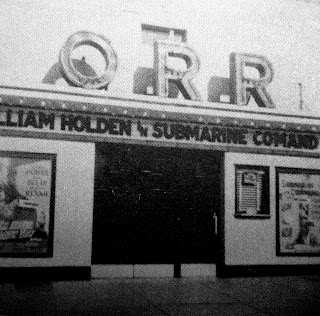 Picture Puts An End to Ignorance~~The special attraction, “Mom and Dad,” which is coming to the Orr Theatre for a limited engagement starting next Tuesday, puts an end to ignorance. It deals with all the delicate subjects of hygiene and the facts of life in a cold, honest, frank, outspoken way.
This film tells its story – a story that thousands of high school girls “lived” last year – and then it goes on to prove where, in most cases, the evil lies – who is to blame. But it doesn’t stop there – it keeps right on going – proves its point and suggests the solution.
-
“Mom and Dad” is more than a motion picture – in fact it’s three motion pictures in one – plus a hygiene commentator, Mr. Elliot Forbes, in person. It is a vital and tremendously important event in every community throughout the nation today.
Conditions which existed before the War, but which have increased manifold because of it – yes, shameful conditions – are its subject matter. “Mom and Dad” is powerful screen-fare, too powerful in fact for the sick, ailing or weak-hearted as nurses are carried by the attraction to aid any who faint.
Sparkling, new and full of modern 1945 zest and catchy language, “Mom and Dad” is first of all entertainment, secondly an impressive warning, and finally proof that immoral living doesn’t pay. It has its highly educational moments, in fact many doctors, nurses, health officials and educators throughout the country have driven miles to witness it because of their interest in just a single sequence.
Because of the nature of the story, grade school-age children are not admitted. It’s ideal educational entertainment for high school-age and older, however. In view of the fact that its medical sequences speak out the truth so frankly and boldly, so that all may see, hear and understand the facts of life, it is shown only to segregated audiences. There will be shows for women and girls only at 2 and 7 pm each day and for men and boys only at 9 pm each night.
Posted by amuse me at 1:10 AM