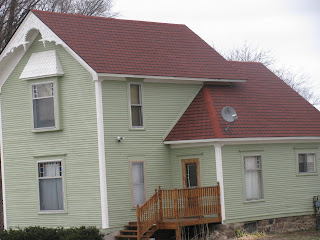 Before we get to a few shots of the "Christmas in the Ville" celebration, I want to showcase a couple of houses that have recently been updated (pictures taken the day of the parade). They are side-by-side, and tomorrow's squint shot will show the other one. This house is on North Second Street, halfway along the east side of the block between Grand River Avenue and Mill Street. Recently, the siding was updated, a new roof installed, and paint added. I don't know if any work was done on the inside, but the outside is a wonderful improvement. And I'm so glad to see houses around the village being worked on.
As a point of reference, this house (and tomorrow's squint shot) could be over a hundred years old. The following picture shows both houses (today's is the one with the wrap-around porch that no longer exists). This photograph is shown in my book, under the year 1909, and was probably taken from the second floor of the current Maria's School of Dance building. What is now a parking lot was part of a lumberyard operation. The reason we know this picture was taken sometime before 1920 is due to the fact that the white, wooden schoolhouse can be seen at about the center of the photograph. It burned in 1921. 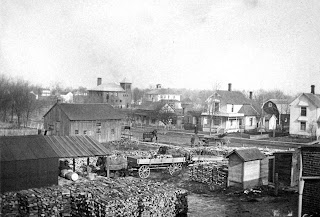