Babe Ruth, the home run champion, who writes for the daily papers, has the following to say of Charlie Gehringer, the Fowlerville Tiger:

The best double play combination I've seen this year is in Detroit.  And it's made up of "kid" players, Jack Tavener at short and Gehringer at second are the boys.  The way they can work together on double plays is wonderful.

I suppose in the last 10 years there has been no better hand at double plays than old Roger Peckinpaugh, who is now in Chicago with the White Sox.  Peck happens to live at the hotel here where the Yankees stop and I was punching the bag with him last evening.

"The real secret of making a double play is a perfect understanding between the shortstop and the second baseman," Peck said.  "When I was with Washington, Bucky Harris and I managed to turn out a good many double plays in the season.  It wasn't because we were particularly fast, or because we had remarkable arms.  We made double plays because each of us knew just what the other would do on every ball hit.  There was no confusion and no mixups."

Peck agreed with me that Tavener and Gehringer had it on the rest of the league in this department this season.  "Gehringer is a wonder," Peck said.  "He doesn't get half the credit he deserves because he makes plays look so easy."

And his great run of plays continued that summer, as shown in a reprinted article in The Fowlerville Review from the Detroit News: 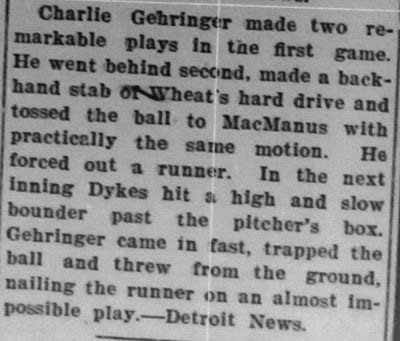