On May 15, 1909, a tornado, referred to as a "cyclone" by villagers, struck with a vengance that destroyed 250 buildings, including the St. Agnes Catholic Church, as well as causing some minor injuries to some residents. Fortunately, there were no deaths related directly to crashing timbers, although one woman did die of heart failure. Much more information and details can be found in my book, The Fowlerville Chronicles, where additional pictures and weather maps are shown.

The following picture shows the back of the St. Agnes Catholic Church, which at the time was located at the corner of Maple and Church streets: 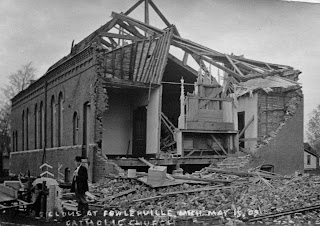 The beginnings of this building were chronicled in 1891 in The Fowlerville Review by G.L. Adams with, Mr. Hugh Loughlin has purchased the lots on the corner of Church and Maple streets and the Catholic society will build a new church upon the same.

Later in the year, The corner stone of the new brick Catholic church was laid with appropriate ceremonies by the Rt. Rev. Bishop Foley, of Detroit, on last Sunday afternoon at which time he also delivered a very eloquent and stirring address. The ceremony was witnessed by a very large concourse of people from all parts of the county, notwithstanding it was the very hottest day of the season.

Do you have any pictures of any of the houses hit by the cyclone?