A couple weeks ago, I had the great pleasure of one of my readers sending me a couple of pictures.  He also wrote me a wonderful e-mail full of memories.  Following are the photographs and the body of the e-mail he sent:

First picture is of (from left to right) Morgan Vaughn, his daughter Maurine Vaughn, and his wife Ada Coll Vaughn, and, standing in front is Marita Ione Pamment, also known as Marita Vaughn (reader's mother). 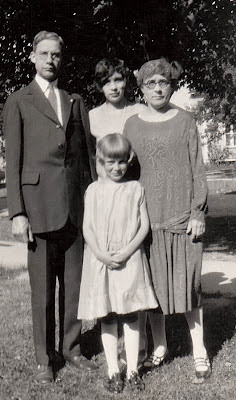 Second picture is the 1926-27 second grade class for Fowlerville Schools. 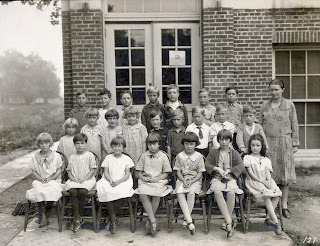 Following is the body of the e-mail:

﻿
Many of the photos that I have are so tiny in size that they don’t scan well.  The attached photo of Morgan was taken about 1926 or 1927.   Left to right in the rear we have Morgan Vaughn, daughter Maurine Vaughn, and wife Ada (maiden name Coll).   Standing in the front is my mother, Marita Ione Pamment although she was often known during her Fowlerville school days as “Marita Vaughn.”   Ada Coll and my grandmother Edna Pearl Coll (Pamment) were sisters.  Many of the Coll family came from Ontario and settled in Fowlerville.  When Edna Pearl Coll Pamment died in 1923, my mother went to live with Morgan and Ada who raised her alongside Maurine and Marguerite (who most likely took this photo) Vaughn.  When I was a young boy we knew Morgan and Ada as our grandparents.  Another sister (Noreen Pamment) came to live with the Vaughns later on, too.  BTW Maurine Vaughn (Powell) lived to the age of 97.

I may have mentioned this but my mother Marita (Vaughn) appears in the 1937 graduation photo with her sister Leta Bell(e) Pamment.  I think Leta may have been held back a grade, and my mother started school early.  Her story is that she boldly went up to the principal on the street and told him she was already to start school – so she did!   So she graduated at age 17 and 3 months.

They lived at 325 E. Grand River as I recall but of course you know that already.  Back in the late 50s/early 60s I remember the porch swing on the front porch.  When one walked in the front door you stepped immediately into a sitting room/living room with the big heating unit.  Off to the left was a parlor which had a bed placed in it when Morgan was dying and as I recall it stayed there.  Often this was where we kids played growing up and they kept the coloring books where we signed our art work for many years afterwards.  Directly through the sitting room was a bedroom and a bathroom.   The ground floor level was completed by a dining room and a kitchen.  I know that dining room was the scene for many family celebrations; in addition to Morgan & Ada’s 50th there were many 25th wedding celebrations and birthdays there.  Tables were set up in the back yard and we had graduation parties and other get togethers there.  Daughter Marguerite lived there after her parents died in 1958.

The things that I remember my mother telling me about Morgan and Ada were that Morgan had an absolute love of nature and would stop the car and have everyone get out so that they could admire the beauty that surrounded them.  Ada was remembered as a very stern woman.  I think it was wonderful, for the times, for them both to take two nieces into their home to raise as their own.  They both died when I was 6 so I don’t have many memories of them.

I also have the photo of my mother’s 2nd grade class photo in Fowlerville from the school year 1926-27 which I attached.  The names are on the back of the photo (I’m not sure how complete) but the teacher’s name is Miss Rita Sherman.  My mother’s name is written as “Marita Vaughn.”  Let me know if you want the names as they are somewhat faint.

Well, I have to run now.   Thanks again for the 1937 photo and it was a treat to peek at photos of Peter Iskra again.  Oh do we have stories about Peter!!!  He was a character but his friendship and companionship to Marguerite Vaughn certainly enriched her life.  I think she would have been a very lonely spinster if not for the excitement of hanging around with Peter.

Morgan Vaughn was one of Fowlerville's busy barbers.
Posted by amuse me at 1:10 AM