Two days ago, the squint shot showed the first house Deo Blackmer, and his wife, Ethel, lived in at one time.  In later years, they lived in this 1950s style ranch at 202 North Maple. 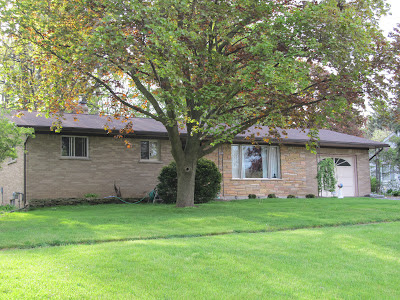 Even though they were not in this house in 1925 and S.T. still ran the store, I thought I would recount a robbery in the store as published in The Fowlerville Review:

Bold Robbery of Blackmer Store~~Between the hours of 8:30 and 9:30 Monday evening, the clothing store of S.T. Blackmer was entered by burglars and between $900 and $1,000 worth of overcoats were taken and the burglars left no clue by which they could be traced.

The store is closed on Monday evenings ordinarily at 6:00, but Deo Blackmer was at the store until nearly 8:00 and as Marshal and nightwatch Daniel Fryant was making his usual rounds trying the rear doors to all the places of business to see they are closed and locked, he discovered the door in the rear of Mr. Blackmer's store to be open and no one within.

Mr. Blackmer was away from home and Deo was finally called by phone and the discovery was made that two of the overcoat cabinets had been stripped and every coat, about 46, had been taken from the hangers, three of them having been dropped in the rear room as the thieves made their exit, which from appearances suggesting that they had been frightened away, as other more valuable property within easy reach had not been taken.

The officers were at once communicated with and quickly responded also, two members of the state police and the report of the theft was sent in all directions by phone.

As C.J. Fuller was coming up to the business part of the village about 8:00 p.m., he noticed a covered speed wagon driving slowly south on Second street and turning west on Grand River, others heard the wagon drive in the alley, but as the Tomion Creamery is located there, nothing was thought about it.

The state police found a few fingerprints on the cash register, from which about $15 was taken which had been left in for change in the morning.

The vaklue of the overcoats amounted to about $900, as they were the cheapest coats in the store, the next two cabinets containing the high-priced ones were untouched for which Mr. Blackmer is thankful, as he carried no burglar insurance.

This village has reason to be thankful it has escaped so long.