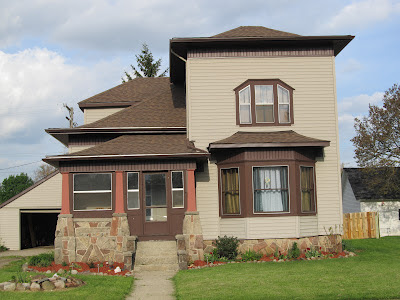 From what I have been told, this house on South Second street, across from the parking lot of the Methodist Church, was, at one time, the house lived in by the Hamilton family.  This family was one of the early pioneers of the area, with G.D. Hamilton being a furniture and carriage maker for over 50 years in the village.  C.D. Hamilton had the dry goods store at the southeast corner of the main four, which later became Ruth's Resale in 1970.

Recently, this house was refurbished quite extensively but now it appears to be empty.
Posted by amuse me at 1:00 AM

I'm not aware that the Hamilton's ever lived in this house. They lived in the house next door on the corner of Church and S. Second until it burned, then built a house more towards the center of the block on S. Second. It may be the house on the south side of the drive for the village offices, but I'd have to check on that.