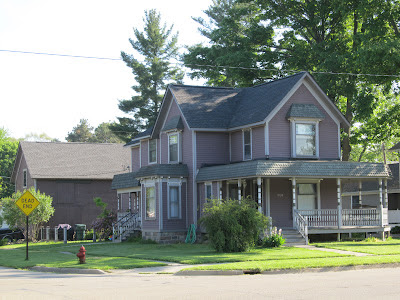 As I continue showing houses and some of their former residents -- information as given to me last summer as a friend and I drove through the village and he reminisced -- today's squint shot is of a beautiful muted lavendar house at the northeast corner of North Maple and East Grand River.

Some of you may remember the Rudnicki name and some of you may even know Dick Rudnicki, the former newspaperman of The Fowlerville Review.  This lovely house was the home of Dick's parents, Lena and Andrew, when they were publishing the newspaper before Dick took it over.

This house was also featured last summer in the walking tour -- which you can read under the "Tour" tab -- and was built in the late 1800s by the Cook family.  Jared L. Cook, a Civil War veteran, was the hardware man in Fowlerville at that time.  His son, Fred, took over the business in later years.
Posted by amuse me at 1:00 AM