Yesterday's squint shot showed the house lived in by Andrew and Lena Rudnicki, at one time, editors and publishers of The Fowlerville Review.  When Mr. Rudnicki passed away quite suddenly, their son, Dick, took over the operation of the newspaper and ran it until 1972, when he sold it to the Press and Argus.  For quite a few years then it was published as an insert in that paper. 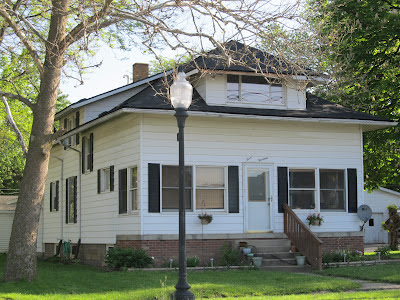 Recently, I had the wonderful opportunity to have breakfast with Dick and he did a great deal of reminiscing while we ate.  We mostly concentrated on talking about what he remembers about the northeast quadrant during his growing-up years.  As I have time, I will transcribe some of my scribbled notes and get this information on the website.  Until then, I'm offering the above picture as the house Dick and his wife lived in during their tenure in the village.
Posted by amuse me at 10:50 AM