After a brief introduction in the old Coughran School, Saturday night, as the sun was setting, a group of us were led to the Kirkland House within the Livingston County Historical Village at the fairgrounds.  We were on the lookout for ghosts. 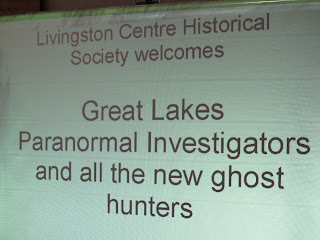 We, or I should say "I" didn't have any luck seeing anything, although the hair on the back of my neck never seemed to relax.  Maybe it was the raccoons living in the upstairs of the house that kept making a scratching noise; maybe my imagination working over time.  After 40 minutes, we walked to the church just to the north of the church.

Infrared cameras, set up by team members earlier, were glowing red in each corner of the church.  We came into the sanctuary and sat quietly.  Some wandered around with "EMF" (electro-magnetic field) detectors while I just sat at the ready with my camera.  Some commented they could feel cooler air, while a couple thought they could smell oranges.  We were ripe for anything! 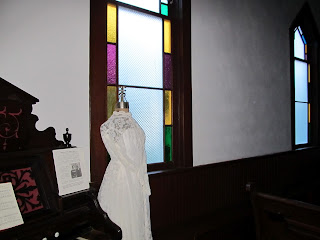 At about 30 minutes into our 40 minutes in the church, we were basically all staring at the EMF on the altar (leaned up against the vase in the picture below), when we heard a beep at the back of the church, in the vestibule.  Our "leader" headed back there and commented, fairly certainly, something was back there, hovering over the electronic equipment for the camera set-up.  No one could figure out why the beeping sound was happening at about every 90 second to 2:20 minute intervals.  And then it all stopped after a half a dozen times. 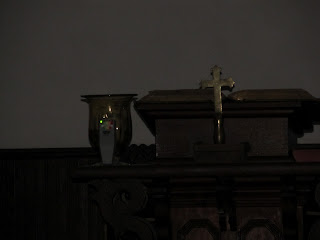 And then, our time was up in the church and we headed to the old Howell Depot building at the far north portion of the historic village.  By now, it was near dark.  One of the gals felt very uncomfortable by this desk in the middle portion of the depot, after she had walked into the building and getting the chills. 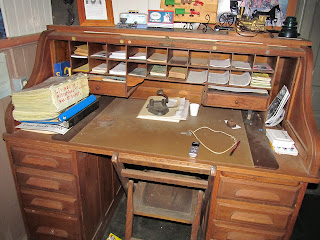 Another checked out this old cash register very closely.  And then there was quite a bit of excitement as we hovered around four old suitcases on a couple of benches in the same room where there is a beautiful display case with Charlie Gehringer memoriabilia.  One of the EMF detectors would got from green lights to yellow and then up to red, wildly blinking.  We took the chance of opening one of the suitcases, but found nothing interesting. 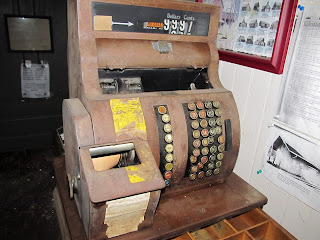 By the time we were done, this was the evening view from the depot to the church steeple. 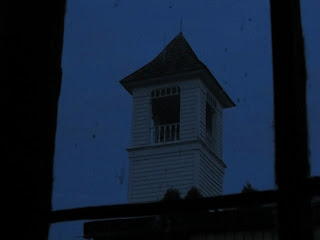 There was another group after ours that started the ghost hunt even later in the evening.  I wonder if there was more activity!  The ghost hunters have my e-mail and said they will be sending any sound waves or film they may have gotten last night.  If there is anything, I will add it to the website . . . that is, of course, if it doesn't cause a ghost to infect my machine!

Happy ghost hunting!
Posted by amuse me at 4:37 AM