So much of the history written about Fowlerville churches has centered around the Methodist church being planned and built by Ralph Fowler.  He has been quoted in numerous articles of a conversation he had with his brother, John, and how the church would be built on that site in honor of their mother.

When the 125th special edition of The Fowlerville Review was published for the celebration, the following article gave a bit more information on the Baptist and Catholic churches that were also planned and built: 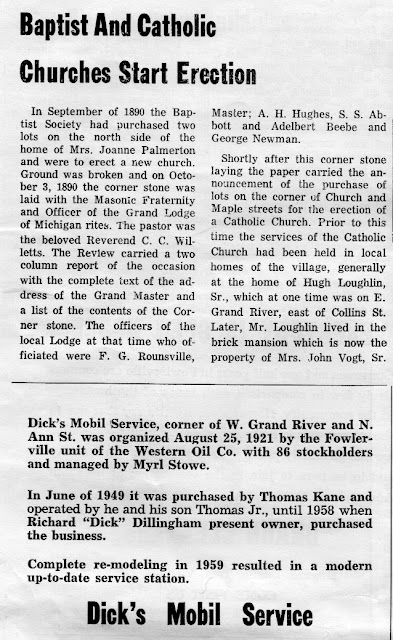 In 1896, C.C. Willett left Fowlerville and the following article was republished in The Fowlerville Review from the Independent, Elkhorn, Wisconsin, paper:

Called A Pastor~~The Baptist church of Elkhorn has called a pastor Rev. C. Carey Willett, Ph.D. of Fowlerville, Michigan, and he has accepted the call and will commence his duties about the middle of September.  The call was unanimous, and was made, Sunday, after the delivery of his third sermon in this place.

Mr. Willett is a man of good presence, and in his discourses shows evidence of scholarly habits and tendencies, those of a man up with the times.  Apparently he does not come before an audience unprepared and his sermons do not descent to sterotyped exhortations.  From all the evidence, it would seem that the church is fortunate in securing Mr. Willett as its pastor.

While here, Mr. Willett called on many of the members and impressed them most favorably, and the universal opinion seems to be that the members of the Elkhorn Baptist church have reason to congratulate themselves on Dr. Willett's acceptance.~~Independent, Elkhorn, Wis.

The Rev. Dr. Willett will close his eight years as pastor of the Baptist church next Sunday evening and there will be no service held in the M.E. church.

The reason for  no service at the M.E. church:

The Closing Sermon~~The Rev. I.H. Riddick closed his labors as pastor of the M.E. church on Sunday evening.  Dr. Willett took up his evening service and pastor and congregation joined in theh closing service, the entire seating capacity of the church and parlors being filled.  Rev. Riddick took for his test the last verse in the Bible and was listened to with close attention, giving words of admonition and love and thanking all for the many acts of kindness extended during the two years of his pastorate.  At the close of the sermon, Dr. Willett made a few remarks concerning the friendly relations of the pastors and churches and hoped that as these two pastors were about to retire the good feeling might continue.  The little balance of a few dollars due the pastor, organist and sexton was then raised and for the first time in years, the entire incidental claim were met in full and balanced.

Mr. Riddick announced at the close that the continuous duties of a pastor of 26 years had told upon him physically and that he should not take work for the coming year, but would take a much needed rest and recuperate.

Closed His Labors~~Rev. Dr. C.C. Willett closed a pastorate of eight years continual service at the Baptist church on Sunday last.  Dr. Willett came to this place with a determination to give his best labor for the church and he has succeeded beyond his most sanguine expectations.  We are not in possession of the figures, but the membership has been considerably increased and theh work has also been propagated to a considerable extent in the country around about, as he has not confined his labors alone to Fowlerville.  The church was a small wooden structure when he came and during his administration the site has been changed to a more convenient one and a handsome brick structure has taken the place of the old wooden one.  At its close, Rev. I.H. Riddick made some very fitting remarks.

On Friday evening over two hundred people gathered at the Commercial Hotel and gave Dr. Willett and family a farewell reception.  The orchestra discoursed their sweet music and S.S. Abbott and Judge Cole gave feeling talks, congratulating Dr. Willett upon the success of his work, regretting his going from us and hoping for his future.  Prof. S. Durfee, in behalf of the company, made some very appropriate remarks and presented him with a fine secretary and Mrs. Willett with a handsome quilt from the ladies social union, to which Dr. Willett replied very feelingly.

They left on Monday for their new field of labor at Elkhorn, Wisconsin, carrying with them the best wishes of a large circle of friends for their future success.

Also, even though this mostly talked about the churches, does anyone want to comment on Dick's Mobil Service?
Posted by amuse me at 1:00 AM