The following two pictures -- part of the same advertisement for W. Bruce Campbell Ford Sales & Service -- are awesome for a bunch of reasons:

~~The first picture shows how the building still standing at the southwest corner of South Grand and West Grand River (slightly west of the intersection) looked before the rough-sawn cedar facade was added to the building.

~~In the same picture, there's a great looking Beetle parked on the street.

~~And, the Gulf station, which is now part of the building and not a gas station, can be seen at the right side of the picture.

~~Moving onto the second picture, this shows the Ford dealership when it was located north of town on North Grand Avenue where the Family Impact Center (formerly the location for the school administration) is housed.

~~And, in the second picture, the phone number -- CA3-9191 -- is listed.  Does anyone remember when phone numbers started with two letters?  Mine, when I was growing up in Lansing, started with ED.

As an additional note, while I was doing research for The Fowlerville Chronicles in 2010, I read an article of why the Ford dealership relocated to North Grand Avenue.  As the article related, in 1958 the state was trying to decide where to locate I-96 and plans were being made for it to run about where Sharpe Road is.  W. Bruce Campbell, taking this information to heart, relocated to be close to where the highway might go.  Final plans took the highway south of town and was completed in 1962.  By that time, the Ford dealership was back to the middle of town.

In my travels, I headed to the building on North Grand to see if there was any evidence of the Ford dealership being there and was able to take the following picture: 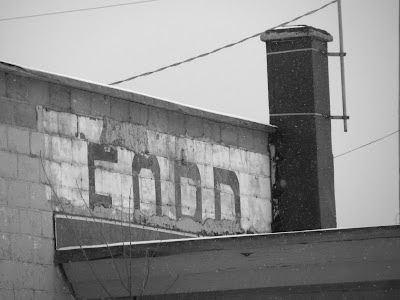 Pretty cool, huh?  I'm glad I was able to get this picture of "FORD" on the south side of the building because it has since been covered up with the renovation of the building the last couple of years.
Posted by amuse me at 1:00 AM