The building between Kim's Barber Shop and the old Butler Gun Shop used to be the location for the Orill L. Mack John Deere Sales and Service.  It now stands empty -- well, if you do peak in the windows you can see some items being stored away.  Recently, the back wall was removed and redone, making me wonder if someone is either hoping to sell the building or open up a storefront.

By 1961, Orill Mack had vacated this building and moved to West Grand River.  Someone -- anyone -- please feel free to comment but I believe this building and Sunoco station were located where the used car lot now stands.  Also, if anyone knows, the building on the left in the second picture -- is that still standing as part of the KW/Danny's Pizza building that now fronts right up to the street?  Or was it torn down?

As I did research for The Fowlerville Chronicles, I found the following picture (which I included in the book along with numerous other ones) in one of the yearbooks -- 1952 -- stored in our historical collection: 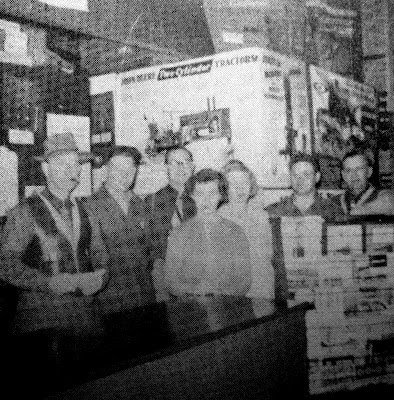 Unfortunately it is a digital of a picture in the yearbook but this was the staff and Mr. Mack in 1952 in the store on North Grand Avenue.
Posted by amuse me at 1:00 AM

The building on the left in the picture was torn down. It was Floyd Moore's Dodge dealership before it became a John Deere dealership.