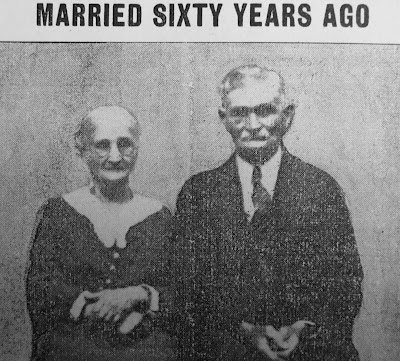 I am estimating this sixtieth anniversary was around 1935 for Mr. and Mrs. Silas Allen.  The following caption accompanied the above photograph:

Mr. and Mrs. Silas Allen of Conway township will celebrate their sixtieth wedding anniversary on Saturday, January 11th.  They will be guests of their children for dinner at the home of Mr. and Mrs. Coye Allen and in the afternoon from 2:00 to 5:00, will hold open house to their friends and neighbors who wish to call on them.  Mr. and Mrs. Allen have resided at their present home the greater part of their married life.  Their children who will help them celebrate the occasion are Mrs. O.H. Holmes of Cohoctah twp., Ray of Locke twp., and Rex and Coye of Conway twp.  They have eight grandchildren and two great grandchildren.

Thank you for posting this. These are my great great grandparents on my Mother's side. I'm so glad to see this and know this information!
~Karin Barasa