While doing research, I would come across references made to Gott's Bridge but could never find any information where it was -- I would read about repairs being made or of it even being replaced -- but no luck of where.  So I thought I would just put out this information for anyone interested.

In an 1880 issue of The Fowlerville Review, the following article referenced John Gott:

Mr. John Gott, of Gowen, formerly a resident of this vicinity, met with an accident which resulted in his death.  On Tuesday, Nov. 7 he was cutting down a tree in the woods when it suddenly split and fell upon him, injuring him so that he died about three o'clock in the afternoon.  He had been blind for about five years past, and owing to that fact, was unable to get out of the way of the tree.

And then, a recent acquaintance supplied me with the following picture of William Gott: 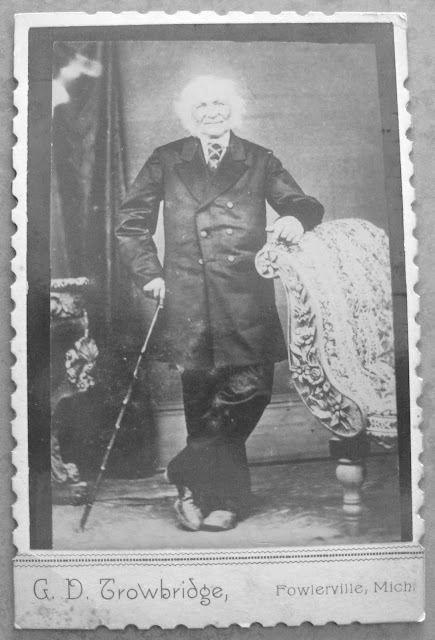 On the back of the photograph, in a cursive script that looked rather halting as it was written (with the mispellings) was, William Gott, Senior, Fowlerville, Michigan.  Taken in England in July 1881.  Coppied by G.D. Trowbridge of Fowlerville in the Somer of 1900.  This is the coppy taken in Fowlerville. 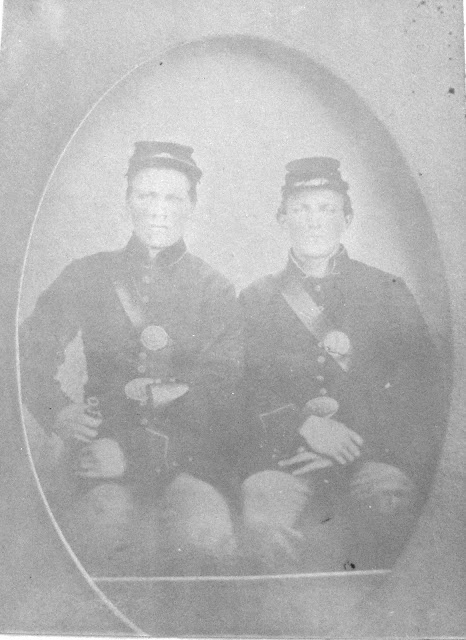 On the back, William Gott and Peter Stevens taken in War time.  This is retaken and enlarged from one that was taken when they first enlisted in February 1863.  William Gott then was 19 years old.

So, with all of this information at hand, the Gotts must have lived in Handy Township, but where?
Posted by amuse me at 1:10 AM

William Gott is shown on the Federal census of 1880 in Handy Twp. He was born in 1813 in England. His wife's name was Elizabeth,son Isaiah, who were both born in England as well. A daughter Susan b.abt.1857 was born in Michigan. The census only tells us his farm was two farms down from John G. Lockwood's. Perhaps the boy in uniform was another son?

I realize I am looking at this over a year after you posted it, but hopefully my information will help. I am a descendent of William Gott and have been putting together a genealogy of my family. The top photograph is of William Gott, Sr., born in England in 1813. He was married to Elizabeth Wright, and they had 12 children. They came to the United States in 1852 and settled in Michigan in 1853. The William pictured in the Civil War photo is William Jr., who was born in 1843. He was one of three brothers who served in the war. Our records show that they lived in Fowlerville Village.